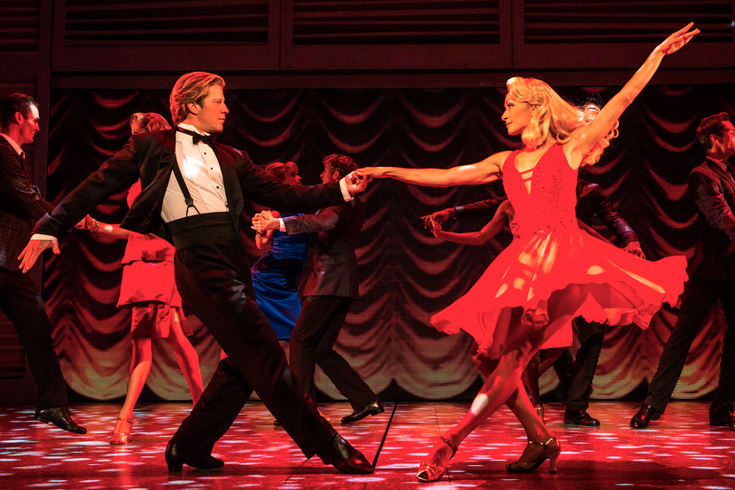 Christopher Tierney and Jennifer Mealani Jones as "Johnny" and "Penny" in "Dirty Dancing" at the Kimmel Center's Merriam Theater.

Following the closing notes of “(I’ve Had) The Time of My Life” and the bows at Saturday night’s musical performance of “Dirty Dancing” at the Kimmel Center’s Merriam Theater, the actor who played "Johnny Castle," Christopher Tierney, had something else to say.

“I’m actually gonna ruin the story a little bit now, because I am very much in love…with the woman who plays 'Penny,'” he said.

Tierney then brought that woman, Jennifer Mealani Jones, to center stage with him, got down on one knee, and asked her to marry him. She said yes, and they were embraced by their castmates as the audience applauded wildly.

Sure, it was "Johnny" proposing to his dance partner, "Penny," instead of his romantic partner, "Baby," but nobody in the audience that night seemed to much mind.

"Dirty Dancing" is a story – first told in the the beloved movie that celebrates its 30th anniversary this year – of two people from different backgrounds who meet and fall in love at a Catskills resort in 1963. PhillyVoice talked to the happy couple about their own love story and what it was like to get engaged on stage in Philadelphia.

Related:  'Dirty Dancing' is coming to the Merriam Theater stage

Tierney and Jones said they began dating last June, during a previous tour, also of "Dirty Dancing." Towards the end of the tour, they decided to give it a go and see if theirs was more than just a “tour romance.” They were a full-on couple by the time the current tour began and Jones was promoted from the ensemble and cast as "Penny," with Tierney remaining in Patrick Swayze’s old part of "Johnny."

Tierney, who was in the news back in 2010, when he was injured during a stunt accident in the Broadway musical "Spider-man: Turn off the Dark," said he had been planning the proposal for more than three months. But he came up with the plan to propose on that particular night in Philadelphia for a couple of reasons: Both of their mothers were going to be in attendance, and Jones has longstanding ties both to Philadelphia and to that particular theater.

“I lived in Philly for six years – Philly was a huge place in my heart,” said Jones, a graduate of the University of Arts who performed with both the Kimmel Center-based Philadanco and the Sixers Dream Team.

“Coming back to Philadelphia, I was so excited, because that’s where I performed all throughout college. So, it was huge that he proposed to me in that theater.”

As for the actual proposal, Tierney told only a handful of cast members, because, “in tour life, people have a difficult time keeping their traps shut.” He also made sure to keep the entire cast on stage by spreading false word of a “press photo” after the show. And rather than carry the ring around with him while performing, he retreated to his dressing room to grab it right before the bows.

Throughout that night’s performance, was Tierney’s mind on the show at hand, or the proposal?

“I wanted to give a memorable show,” he said.

“I’m pretty good at compartmentalizing. But every free moment, I was thinking about the proposal.”

I’m pretty good at compartmentalizing. But every free moment, I was thinking about the proposal.”

In their younger years, "Dirty Dancing" was an important movie for both performers. Jones said she always related to "Baby."

The marriage proposal was not the first ever at the Kimmel Center. According to spokeswoman Amanda Conte, when "Dirty Dancing" was staged at the Academy of Music in 2015, one audience member proposed to another, also from the stage. Couples have gotten engaged on backstage tours, and two members of the Philly POPS actually got married during a performance, also in 2015.

The "Dirty Dancing" run at the Merriam wrapped up this past Sunday, and the tour is headed to Pittsburgh next. But there’s plenty of excitement yet to come for "Dirty Dancing" fans – a TV adaptation of the movie, starring Abigail Breslin as "Baby" and Colt Prattes as "Johnny" – is set to air on ABC Wednesday night, May 24. And a special, 30th-anniversary edition of the original movie is available on DVD and Blu-ray.

As for the happy couple, they’re planning to finish up the current tour, take a post-tour/engagement trip to Spain and possibly France, and then move to Los Angeles, when the wedding planning will begin in earnest, with plans for the actual nuptials in “about a year,” Jones said.

“I want him to be my husband sooner rather than later,” the bride-to-be said.