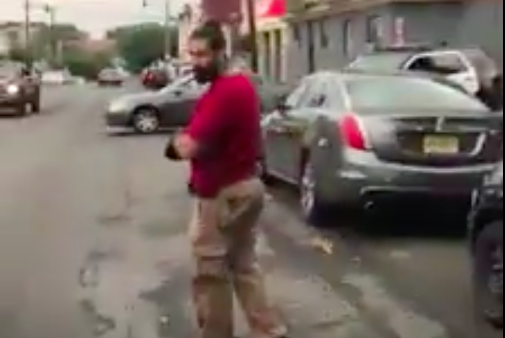 A New Jersey man's confrontational video of a plainclothes police officer conducting a search of his van went viral over the weekend as Passaic County prosecutors vowed to investigate the incident.

The undated video, which unfolded in Paterson, first appeared Friday on the Media Take Out Facebook page. A heated discussion about the circumstances of the search prompted speculation that the officer may have been attempting to plant something in the man's vehicle. (Warning video contains explicit language).

"What is you in my van for?" the owner of the van asks the officer, who responds that he was able to gain access because the car was unlocked. Under the protections of the Fourth Amendment, searching a private citizen's vehicle typically requires a warrant or evidence of probable cause to engage in criminal activity.

At one point, the officer tells the van owner there had been multiple neighborhood complaints about guns in the vehicle, yet the owner claims he is not from the area. The incident reportedly took place on Union Avenue between Redwood Avenue and Jasper Street.

In a statement, the Passaic County Sheriff's Office confirmed to the Paterson Press that the plainclothes officer is a member of the department and that an investigation is underway.

“In an effort to assure an independent investigation of the circumstances around the search video, the matter has been referred to the Prosecutor’s Office for a thorough and independent review,” a sheriff’s department spokesperson told the publication.

The same spokesperson declined to tell the Paterson Times whether or not the officer had obtained a warrant prior to searching the van. New Jersey police have had greater leeway for warrantless vehicle searches since 2015, when standards were relaxed by a state Supreme Court ruling.

Ed Barocas, legal director for the American Civil Liberties Union, told the Paterson Times he believes the footage is "incredibly troubling and disturbing," adding that the officer's conduct was unprofessional.

“We don’t know if it’s just an unlawful search which is bad enough itself," Barocas said, "or something more nefarious."