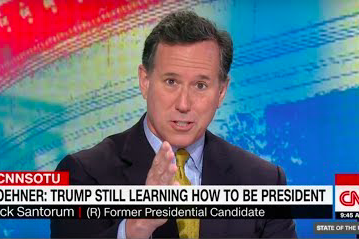 Former Pennsylvania Sen. Rick Santorum appears on CNN's "State of the Union" on Sunday, May 28, 2017.

Depending on where you rest along the political spectrum, finding points of agreement with former Pennsylvania Sen. Rick Santorum can be an uncomfortable realization. The two-time Republican presidential candidate tends to make his most jarring remarks with the same steady charm that elevated him into national politics. To see him lose his cool, even a little bit, is a rare treat.

Case in point: in December, Santorum, whose own father came to the United States as an immigrant, told a young Mexican engineer and DREAMER that she should probably leave the United States at her soonest opportunity. That didn't go over very well, although all things Santorum are relative after sex columnist Dan Savage dragged the family surname through the mud — and atop Google's rankings.

Now a regular contributor on CNN, Santorum allowed his frustrations to boil over during a "State of the Union" segment.  When asked about President Trump and his penchant for using Twitter as a personal sounding board, Santorum beamed into the camera to let loose in what can only be construed as a direct appeal to the oval office.

Trump's latest round of tweets, meanwhile, again targeted the media for its alleged vendetta against his administration.

It is my opinion that many of the leaks coming out of the White House are fabricated lies made up by the #FakeNews media.

....it is very possible that those sources don't exist but are made up by fake news writers. #FakeNews is the enemy!

Santorum clearly has no patience left for the president's social media habits. Watch the controlled outburst below.

"The fact is that this administration should be doing so well, and could be doing so well, if they just focused on getting their agenda passed," Santorum said. "The last nine to have hopefully shown the president that if you stay on message, you stick to the script, you focus on policy, you drive home the messages that you talked about during the campaign, and that people in America excited about, you can be a great president."

That's the good news for Trump. The bad news, supposing he can't shape up?