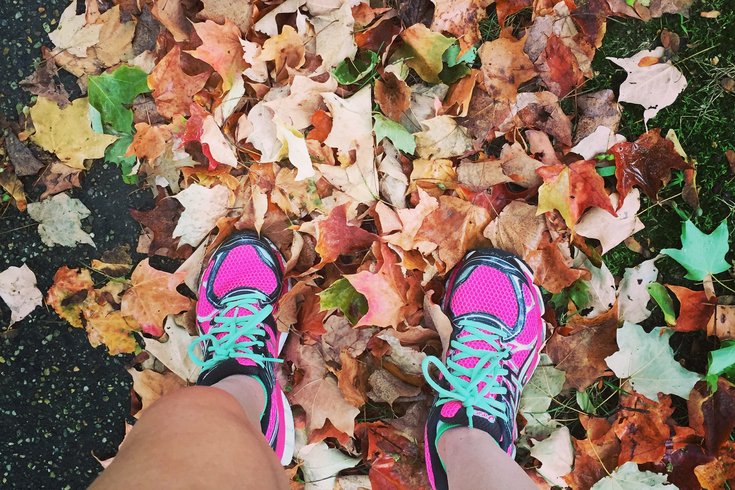 Why October's the best month to start running

This New Year’s Day, like all New Year’s Days of old, throngs of would-be fitness enthusiasts will hit the streets, bloated, hungover, and bundled up in their brand new windbreakers. They’ll pack the local gyms like fish in tin cans where it’s too tight to flinch, much less move a listless muscle.

After months spent gorging on pumpkin pie and 24-hour Christmas movie marathons, Jan. 1 is the worst time to initiate a new exercise routine. It’s freezing cold and agonizingly dark. We’re crashing hard off our holiday highs. Three-quarters of us are deficient in Vitamin D. Seasonal Affective Disorder is in full swing, with an estimated 20 percent of Americans experiencing some degree of winter sadness, plus the associated weight gain, irritability, and fatigue.

If prevention is the best medicine, October is the best month to preemptively tackle holiday stress, winter weight gain, and cold weather blues by heading outside, soaking up the lingering sunshine, and learning to generate a genuine endorphin boost, before another inevitable arctic freeze ensues.

Yet society’s Hallmark calendar has brainwashed us to believe Jan. 1 is not only the best but quite possibly the only day we stand a chance at making a positive shift in our physical fitness. There’s something about a fresh at-a-glance calendar that compels us to wander outside, starry-eyed and lace up our kicks for the first time.

Each New Year’s Day we’re full of determination; our hearts are bursting with the best intentions. And yet, just one week later, nearly a quarter of us have quit. The number of successful fitness converts dwindles even more dismally throughout the year.

It’s easy to see why. Cold air hurts to breathe, especially if you’re not already a conditioned athlete. Snotsicles suck, but they can be too much to bear when you’re so new to running that running, in general, sucks, too. Working out in an overcrowded, grimly lit gym can be an absolute horror show if you’re unaccustomed to the whole gym thing - plus, sad, and swollen, and sunshine deprived.

Experts and lay people alike love to speculate about why we have such a hard time sticking to our New Year’s resolutions, especially exercise and weight loss regimes. Last Jan. 7, that fateful day when the first wave of resolution-makers has already thrown in the towel, the Washington Post explored the pitfalls of fitness resolutions that are “vague” and unrealistic.

Science suggests using social media and friendly peer pressure to hold yourself accountable to your goals. Behavioral economist George Loewenstein believes establishing a financial stake, or bribing yourself to exercise works -- in the short term. However, very seldom do we consider the very significant seasonal impact on our ability to implement - and stick with - successful health improvements.

According to the University of Scranton’s John C. Norcross, whose research illustrates just how quickly we fall off the New Year’s resolution wagon, “Successful resolutions also begin long before Jan. 1, in what some researchers call the ‘contemplation phase.’ That's the period when you develop an attainable goal and the confidence that you can stick with it even if you slip occasionally.”

The problem is: if you waste autumn's crisp, cool air and fairytale foliage simply “contemplating” change, by the time January rolls around, you may already be buried too deep in heavy snow and winter doldrums to dig yourself out.

Before I became a dedicated daily runner, I tried, over many New Year’s, to make the habit stick. I’d drag myself out of bed countless times when the first day of a year arrives and tiptoe outside into the treacherous New Jersey tundra. I’d barely make it around the block, at a slow, plodding jog, before admitting defeat and slogging back home, to defrost over a consolatory cup of hot chocolate.

Freezing air is sharp and painful to inhale if you haven’t already built up a tolerance. My lungs burned, my ears throbbed, my knees ached. My tendons and ligaments cryogenically stiffened and strained. I’m pretty sure, at some point, my eyeballs froze over.

And then, one autumn day, six years ago, I decided to give running a fresh start. There was nothing official or ceremonious about the time of year, other than the atmosphere was perfectly charged for running. The air was balmy, yet cool enough to stay comfortable in slouchy sweatpants and long-sleeve cotton tees. I’d never appreciated the beauty of autumn leaves more than I did jogging beneath curtains of ruby and gold. There was no pressure to run for the sake of achieving peak fitness or an athlete’s physique, no impending “bathing suit season.” Just a slow, sienna descent into winter, which I’d be much better equipped to deal with, this time around.

Whereas winter had always left me sad, unproductive, and stuffy with chronic sinusitis, running through autumn buffered my mind and body to meet the cold head on. Because I gave myself time to develop sufficient strength and stamina over the proceeding weeks, Jan. 1 came and went like any other running day. Unlike previous years, when I’d flake at the first sight of snow, I barreled through the sting of winter precipitation. I’d already invested too much time and energy to quit. I’d already begun to reap the rewards. I was happy. I was fit. I was resolute.

If you’ve always dreamed of becoming a runner, or even if you’re simply dreading the winter blues, don’t wait until New Year’s to make your move. Give yourself a head start this October, instead. You don’t have to go all out, at first. When it comes to picking up running, every incremental bit of distance goes much farther than you’d think. A good “Couch to 5K” plan, for example, introduces short bursts of running interspersed with longer intervals of walking, so just about anyone can make the shift from complete inertia to proficient racing in just a matter of weeks.