The new shoes are inspired by A.I.'s outfit before his legendary Game One of the 2001 NBA Finals 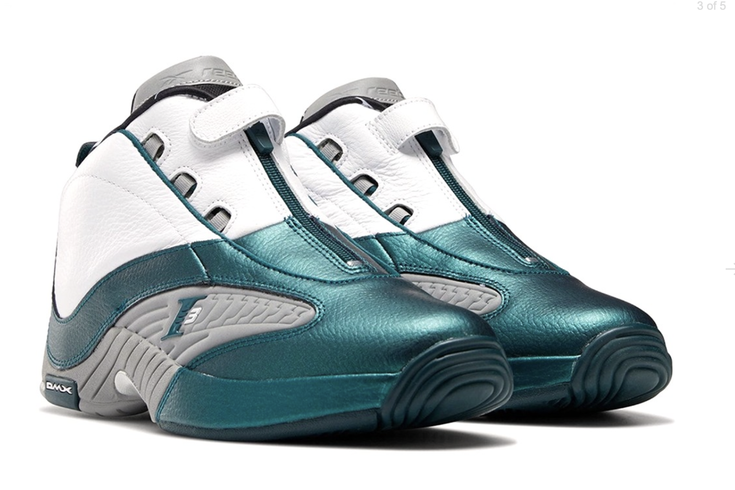 Few basketball sneakers are more iconic and enduring than Allen Iverson's Question and Answer flagship line with Reebok, which had 14 different iterations during Iverson's playing career and has since spawned countless new colorways that pay tribute to the NBA Hall of Famer.

The period from 2000-2002 was a high point in enthusiasm and optimism for Philadelphia sports fans. Both the Sixers and Eagles were suddenly rising threats led by young stars in Iverson and Donovan McNabb. Their cultural impact went far beyond Philadelphia as they emerged as superstars in their respective leagues.

Later this month, Reebok will release a new Eagles-themed colorway for the Answer IV sneakers, which A.I. wore during the 2001 season when the Sixers reached the NBA Finals, falling 4-1 to the Los Angeles Lakers. Iverson also won the All-Star Game MVP award that season.

The new sneakers are inspired by Iverson's outfit before Game One of the series — the Sixers' lone win — when he was seen in the tunnel of the arena wearing a custom No. 3 Eagles jersey and an "I3" du-rag representing A.I.'s logo. It was a few months before the Eagles began the first of four seasons in which they reached the NFC Championship Game.

The palette of these hoop kicks appropriately align with the Philly football franchise’s signature colors. Upper halves split its tumbled leather materials between a clean white hue that covers the collars and mid-foot while the forefoot and toe boxes are drenched in a shimmery emerald-esque green. Small doses of a muted gray also make an appearance on the base atop the sculpted lower midsole and forefoot molds that host the “I3” branding as well as the tongues which are debossed with a Reebok hit. Additionally, the aforementioned du-rag pattern is printed on the interior to further echo its motif.

The new sneakers will be available from Reebok and other retailers beginning Jan. 21 for $150.