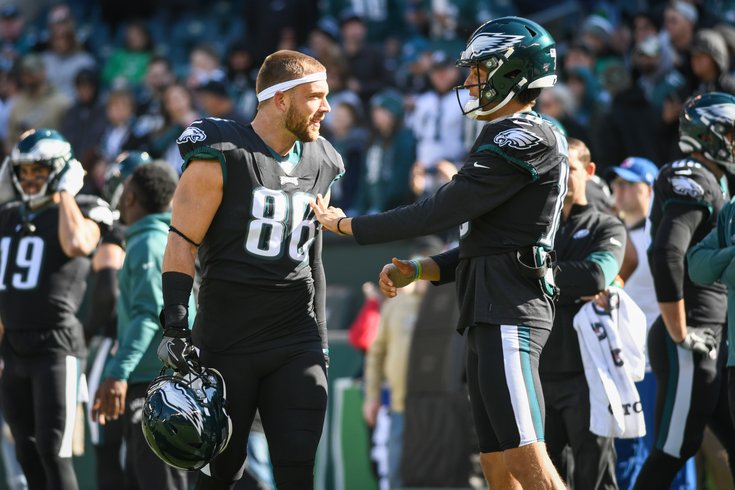 Eagles tight end Zach Ertz (86) telling Mack Hollins (16) that he better catch the ball when it comes his way.

On Sunday afternoon, the Eagles will welcome the Seahawks into Lincoln Financial Field as the Birds look to avoid falling back below .500, much like they were at this time last season before making a late run at the playoffs. Moreover, the Eagles could have a chance to move back into an NFC East tie with the Cowboys, who have a tough test this weekend when they travel to Foxboro to face the Patriots.

We've already broken down the injuries, provided some matchups to watch, and offered up our own predictions — as well as rounded up some local and national predictions from other outlets — to get you ready for the Eagles' Week 12 tilt against Seattle. Now, as we do every week, let's take a look at some numbers to keep an eye on in the form of our five over/unders...

That's the current total being offered over at Bovada, and it's pretty much held steady throughout the week — interestingly enough, the line moved from the Eagles plus-3.5 in some places to just half-point favorites in this one. But when you look at the total points number in this one, our writers seem to think it's spot on, with four of our six predictions being within a point and a half (three have it at 47 points and another has it at 46 points). However, the safer bet seems to be on the over with the other two picking a total north of 50 points.

Last week, most of us took the over in the Eagles matchup with the Patriots, only to watch those two teams struggle to 27 total points. But the Seahawks defense is decidedly not the Patriots defense, and the Eagles, despite their limitations on offense, could put up some points on Sunday against the 23rd ranked scoring defense in the NFL. That being said, the Eagles scoring defense is currently ranked 19th, and Seattle's offense is seventh in the league in scoring offense, so there should be points on both sides.

Earlier this week, Jimmy Kempski went back and looked at each of the Eagles' incomplete passes this season, and by his count 23 of them were dropped. Through 10 games, that's atrocious, especially when you consider that's nearly 10 percent of all the "catchable passes" thrown by Carson Wentz this season. That's an average of 2.3 drops per game, which, as we've seen firsthand already in 2019, could be the difference between a win and a loss.

The Eagles could be without both Alshon Jeffery and Nelson Agholor, the team's two worst offenders in terms of drop rate, but that doesn't necessarily mean Wentz' passes will be in better hands, as pretty much everyone except Zach Ertz and Miles Sanders are the only two players on the entire team with a respectable drop rate (among those who have seen multiple "catchable passes" thrown their way).

Over their last two games, the Eagles have averaged 2.5 drops per game, including two last week against the Patriots. Against Seattle on Sunday, they're already facing a tough enough test without making things any more difficult for themselves, and if they hope to come away with a win, they'll need to cut that number down to zero. However, with a wide receiver corps that could very well consist of Jordan Matthews, Mack Hollins, J.J. Arcega-Whiteside and newly-promoted Greg Ward, it's nearly impossible to have any faith. Hell, with the way they've played this season, it would be impossible to trust the Birds receivers even if Jeffery and Agholor were healthy. While I don't think it'll be a clean game, I do think (read: hope) the Eagles can keep it below three.

Last week, we wondered how many rushing yards Jay Ajayi would pick up in his first game back with the Eagles, and then he never even saw the field against the Patriots. With Jordan Howard likely to be sidelined again on Sunday — and Ajayi now having a full week of practice under his belt, rather than just a Saturday walkthrough, it's safe to assume we'll actually see Ajayi on the field.

The question then becomes, who's role is he taking? Doug Pederson said multiple times that Ajayi was brought in to replace Darren Sproles, who is done for the season, and that the team thought they would also have Howard back well before now. But Ajayi certainly fits more into the Jordan Howard north-south running style than he fits into the Sproles mold as a change-of-pace back. It's probably a lot to ask of Ajayi in his first game back from injury, but if the Eagles could get back to a more balanced attack between Sanders and Ajayi, they might be able to do some damage on Sunday.

Of course, they have to run the ball in order for that to happen, something they curiously failed to do last week against a New England defense that is susceptible to the run. This week, look for Pederson to get back to the ground game, especially with the fragile state of the receiving corps, and try to beat Seattle on the ground. I think Ajayi finishes with around 45 yards (30 on the ground and 15 through the air). That may be a bit optimistic, but it's also exactly what the Eagles will need.

Last week, Carson Wentz was sacked five times by the Patriots, all of which came after Lane Johnson left the game with a concussion. Unfortunately for the Eagles, they'll be without Johnson again this weekend. However, after a full week of practice on the right side, it will be Andre Dillard and not Halapoulivaati Vaitai replacing the injured right tackle. And as we've seen this season, Jason Peters is a candidate to leave with an injury any time the Eagles take the field, meaning there's a chance that for at least some of this game, the Birds will be without both their starting tackles.

And while the Seahawks haven't racked up a ton of sacks this season — they're tied for 28th in the NFL with 20 total sacks — the Eagles have been giving up sacks at an alarming rate in recent weeks, allowing Wentz to be sacked 15 times in their last four games. Jadeveon Clowney must be champing at the bit.

One of the ways the Eagles can combat those sack numbers is by committing to the run and staying ahead the of the sticks, thus avoiding long second- and third-down situations on Sunday. The Seahawks defense isn't great this year, and the Eagles should be able to find ways to move the ball despite their clearly limited personnel. Dillard has looked good when filling in for Peters this season, and after last week's performance, you have to assume the Eagles are going to put a priority on Wentz getting rid of the ball quickly. I'll take the under here, but it's going to be close.

If there's one thing Russell Wilson excels at (and there's certainly more than one) it's extending plays with his legs. Often, they result in throws on the run, but he also has been known to scramble for first downs, something he's done 15 times already this season and has done at least twice in half of his teams games.

The Eagles run defense is tough, but these are often broken plays where the defense isn't expecting a run and is therefor out of position when the quarterback takes off, and they've been hurt by them in the past no matter how good they've been against the run. With the Eagles secondary looking better in coverage in recent weeks, the front seven needs to make sure to keep Wilson in front of them in order to avoid a negative play turning into a potentially back-breaking first-down conversion. It's easier said than done, especially given Wilson's dangerous group of receivers, but it could go a long way to determining the outcome of this game. Unfortunately...