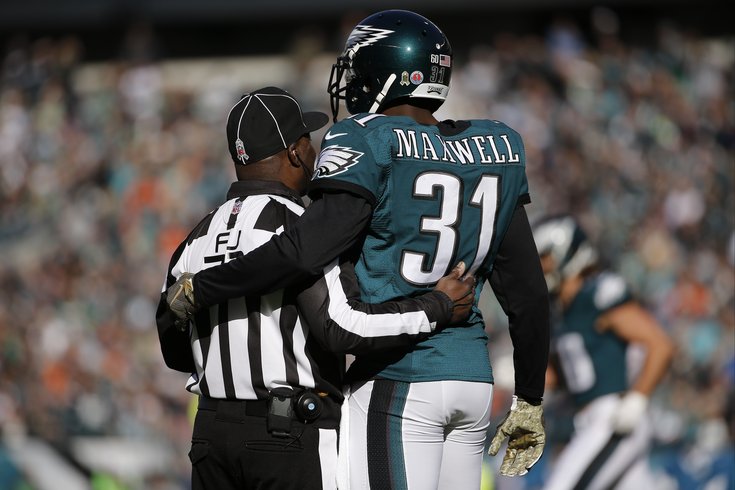 Byron Maxwell has been a disappointment this season, but the Eagles still need him.

After a few weeks in which the Eagles didn't have any injuries that held players out of games, the Birds could be missing a pair of key defenders tonight against the Redskins. Here's a look at the Eagles' and Redskins' injuries, with analysis:

• CB Byron Maxwell (shoulder): The Eagles will likely be without Maxwell, who did not practice at all this week. While Maxwell has been disappointing this season, the Eagles are unquestionably better with him than without him. Maxwell's likely absence will have a trickle-down effect on the rest of the secondary. It will require the Eagles to have extra defensive backs on the field against the Redskins' "11 personnel" (3 WRs, 1 TE), which means significant minutes for some combination of the following guys -- EJ Biggers, Jaylen Watkins, Chris Maragos, and Ed Reynolds.

• NT Bennie Logan (calf): The Eagles' awfulness against the run of late has been a team effort, and obviously, the Eagles have to tackle far better than they have recently. If Logan cannot go, which is expected as he did not practice at all this week, they'll be without one of their best run defenders.

• WR Seyi Ajirotutu (ankle): The Eagles can make up for the loss of Ajirotutu if he cannot go, as they are loaded with quality special teams players.

• CB Eric Rowe (concussion): Rowe passed the concussion protocol early this week, and was a full participant in practice all week. He is expected to play.

Riley, Goldson, Moses, and LeRibeus are all starters, and are all listed as questionable or out. We'll update their statuses when the Eagles' and Redskins' inactive reports are released.