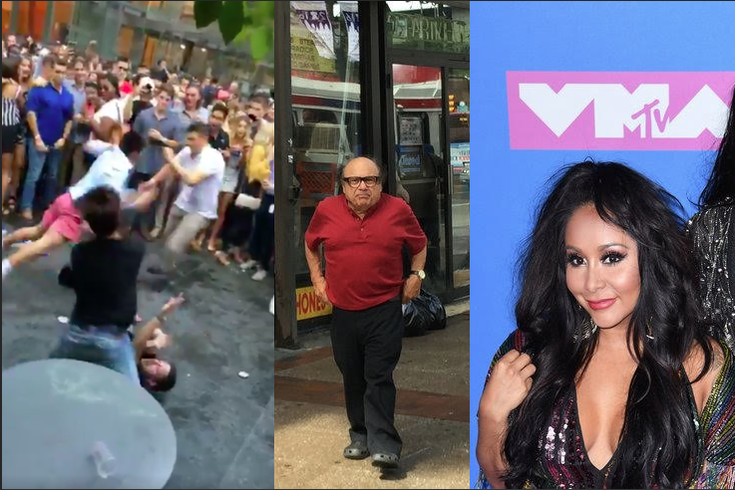 Snooki, the cast of 'It's Always Sunny in Philadelphia' and Center City Sips brawls all made their way into the best tweets of 2018 files.

All tweets aren’t the best tweets, but many are very, very good. It seems unfair to let those which don’t qualify for the Top 20 to just fall to the wayside, though.

To that end, in advance of the best-of-the-best post from later this week, we now hereby present the honorable mention tweets.

They’re funny. They’re serious. They’re everything in between.

Some are also NSFW, so don't wake the kids.

With the social-media site’s constant churn, it’s safe to predict that we missed some. So, when all’s said and done with a week-long series, send them along so we can revel in them together.

The Gang Performs “Tusk” with the USC Marching Band.

I'm sorry but Fleetwood Mac look exactly like an old version of the It's Always Sunny in Philadelphia gang and I don't know what to do with this information @alwayssunny pic.twitter.com/sNaTgImrUI

thoughtful for Amazon to put up an antifa starter pack on black friday pic.twitter.com/PwAuKlVEGv

When menus blow our minds.

HughE with the cryptic shade.

How annoying, please don’t pose for me with your mistress if you don’t want the photographed published. Check your ego at the door and be honest . U can even pull me aside or email like the other adulterers!!

Make some room at the Philadelphia Museum of Art.

I dropped a box of spaghetti on the ground and accidentally graduated from Art School. pic.twitter.com/X8NdjG6vdY

I guess my daughter is on team Belle. pic.twitter.com/9IIxVxy2tB

Snooki is an American treasure.

Wow, this extract from Wolff’s book is a shocking insight into Trump’s mind: pic.twitter.com/1ZecclggSa

And then he uninvited them from the White House ceremony...

Congratulations to the Philadelphia Eagles on a great Super Bowl victory!

The students just found out we are all going to see BLACK PANTHER! We will have a day of cultural classes, African dancers, historical lessons and then we will all go see the film! Turn up!!!! @ronclarkacademy @chadwickboseman #tlhanna pic.twitter.com/oUhWse5ghr

To the lady at Costco with her son on a leash. I'm sorry that I asked if he was a rescue.

The profanity wasn't necessary but thank you for not siccing him on me.

Too soon to talk about guns?

I was hiding in a closet for 2 hours. It was about guns. You weren't there, you don't know how it felt. Guns give these disgusting people the ability to kill other human beings. This IS about guns and this is about all the people who had their life abruptly ended because of guns. https://t.co/XnzhvuN1zd

All I said was Cadbury cream eggs suck, rabbit.

This is the danger of campaigning at a candy factory. #PA18 pic.twitter.com/omssQlvAF1

I'm here on call for major trauma right now Donnie. I wouldn't call it a warzone but the vending machine is out of Coke Zero #disaster #godhelpus https://t.co/pqoIg5aU9a

my gay ass when i try to vote multiple times in disguise pic.twitter.com/OVdCkl2Odh

Dancing people on both sides.

The bell tolls for they.

Hemingway ain’t got shit on this pic.twitter.com/CulksodpJD

He would’ve gotten away with it…

what kinda Scooby-Doo shit is this https://t.co/Lq0KIvJWpm

I hope everyone takes a moment today to remember Saman Gunan, the Thai Navy Seal that died making sure the kids stuck in the cave had enough oxygen so that today's rescue would even be possible. #ThaiCaveRescue pic.twitter.com/tOW1dZNjNP

In which a lib owns miniature-golf enthusiasts.

I saw a strip club across the street from a minigolf place and I’m liberal but that’s too much for me. What if you’re just trying to have a nice afternoon with your family then your kids look across the street and have to see a bunch of losers playing minigolf?

Fans of “The Wire” will get this one.

A story in three parts. pic.twitter.com/NoxRtEXNzu

Ancient gods and goddesses appear to play with the ‘Blood Moon’ in Athens in a series of stunning pictures by #AFP photographer @ArisMessinis pic.twitter.com/IhVF9QuOOo

This drawing from a Heimlich Manoeuvre how-to contains more complex emotion than nearly every novel pic.twitter.com/jHWWjLpvE0

Now ya got blocked by us 👋 https://t.co/aLMuThCKeB

Is this an abortion announcement? pic.twitter.com/EbDJpqZZAQ

Diving right on into those DMs.

Keeping it real Part I.

amber is a real one pic.twitter.com/hRuQuFo0Zz

Frank felt safe tweeting this because he knew it wasn’t possible for the public to boycott him more than they already were. pic.twitter.com/siNyeCRdEo

I have a difficult time believing that hundreds of gymnasts could be molested by a single osteopathic physician over decades, and not report it https://t.co/DxgQoJ5DrR

Hey @Twitter remember when I reported the guy who was making threats towards me after my appearance on @FoxNews and you guys sent back a bs response about how you didn’t find it that serious. Well guess what it’s the guy who has been sending #bombs to high profile politicians!!!! pic.twitter.com/xBY8FMbqnq

when my iPhone gives me the "Update Ready to Install" notification pic.twitter.com/54l92fdpWZ