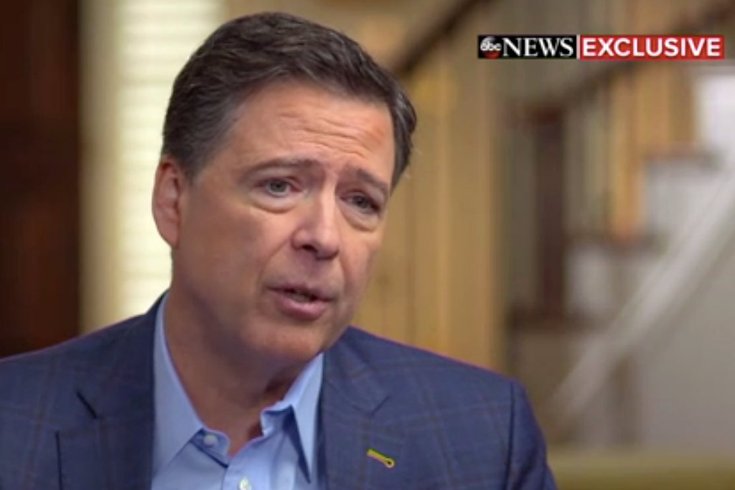 James Comey answers a question from ABCNews' George Stephanopoulos during an interview that aired Sunday night.

Former FBI Director James Comey's interview with ABC News aired Sunday night, stirring a storm of Tweets – from those blaming him for costing Hillary Clinton the 2016 presidential election to others blaming him for the long investigation of President Donald Trump regarding possible Russian interference with the election. Some likened him to a patriot; others a traitor.

Comey, who was fired by Trump nearly a year ago, sat down for an interview with George Stephanopoulos ahead of the release of his memoir, "A Higher Loyalty."

Here's what people were Tweeting as the hour-long interview proceeded:

We all kinda know @realDonaldTrump is glued to his tv right now. I mean he usually is, but we know for sure he is now. #ComeyDay

I can’t wait for the tweetstorm after Comey tonight. #ComeyDay

James Comey has done something that few have ever done and I give him credit for this. He managed to get republicans and democrats both to hate him. He a true moderate 😂 #Comey #ComeyInterview #ComeyDay

Not interested in this #ComeyInterview
Trump is @POTUS because of him. End interview.

@realDonaldTrump what an honor it would be to meet you, or even have you recognize a tweet, but I know that is not possible. Please do not tweet to respond to #ComeyInterview, he is ruining himself. No words needed from you

How does someone like Lyin' James Comey make it to the top of the FBI? That's why the FBI doesn't work and we have school shootings. They're too busy with witch hunts. Comey ain't my homey. #MAGA #Trump #Comey #ComeyDay #ComeyBook #ComeyInterview #TrumpRussia #FBI #ABC #FakeNews

lmfao him hiding in the curtains. This is actually hilariously awkward. #ComeyDay

The trolls are out in full force. Damn. The man had a lifelong honorable history in justice, and left with his conscience in tact - something @realDonaldTrump can’t even spell. #ComeyInterview

@Comey sounds and looks like a bitter girlfriend after a bad break up. Man up and move on! #ComeyDay #trump #JamesComey

If the goal of this interview is to paint #Comey as empathetic it fails horribly. If the goal is to reinforce Trump's corrupt tendencies it's a home run #ComeyInterview

#ComeyInterview OmG! Comey is so biased against Trump! Thank God he was fired! @GStephanopoulos Your questions were just more of the same. #antitrumpagenda #popjournalism

#ComeyInterview You know for being an FBI director this guy admits to being pretty spineless. #Abc #comey

OMAAG, that tape of @realDonaldTrump denying the loyalty ask!! WTF??? He looked like some half alien/half oompa loompa freakazoid! #ComeyDay

The Comey interview has solidified my opinion that Trump is a shitbox. #ComeyInterview #ComeyDay #comey

One key question someone should ask @PressSec : Did Trump ask Sessions and Pence to leave the room before asking #Comey about Flynn #ComeyInterview

Trump obstructed justice... Can't wait to hear how much fake news this is #ComeyInterview

I want to see the tapes with the #Russian hookers. That’s what they got on him. #ComeyDay #ComeyInterview #ComeyMemo

Can someone please explain to @realDonaldTrump that a #TaintTeam is not what he thinks, nor does it requires jelly/syrup @MichaelCohen212 #ComeyDay https://t.co/5WYSTy3I8e

I love how this whole #ComeyInterview is just another way for libs to attack #Trump #OBSESSED!!!

So much @Comey did was out of line. Leaked his memos. Outed his investigation. But nothing he did is as bad as @realDonaldTrump #ComeyInterview

Damn #TheTapes! Forgt about those.... Where's the tapes. Everything every President says shoud be taped while working for we the people! #ComeyInterview #ComeyDay

Impeachment would be “letting the American people off the hook.” Ouch, @Comey. #ComeyInterview

Comey is absolutely credible. And we all know that @realDonaldTrump is a lying liar, so it's clear whose story is the truth #ComeyInterview

That impeach Trump commercial was the highlight of this interview... #ComeyInterview

For his part, President Trump held off on responding until this Tweet at 8:25 a.m. Monday:

Comey drafted the Crooked Hillary exoneration long before he talked to her (lied in Congress to Senator G), then based his decisions on her poll numbers. Disgruntled, he, McCabe, and the others, committed many crimes!