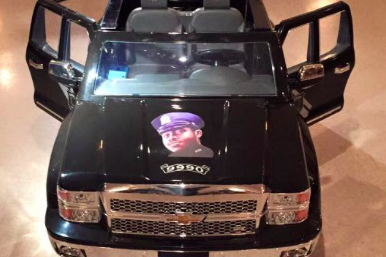 One of the many holiday presents donated to the family of fallen Philadelphia police Sgt. Robert Wilson III by Collingdale Fire Companies #1 and #2.

The family of fallen Philadelphia police Sgt. Robert Wilson III was reminded of the true reason for the season Sunday when decorated Collingdale Fire Company fire trucks made a special stop at their home.

According to CBSPhilly, the company's firefighters, as well as several Philadelphia police officers, unloaded several donated gifts for the family.

Wilson's two sons were 9 years old and 1 year old when their father was killed in the line of duty in early March.

Among the gifts was a special present for Wilson's youngest son, nicknamed "Chubbs." The Chevy Silverado Power Wheels truck had been customized with decals of his father's face and the nickname.

The young boy's mother, Crystal Benson, told CBSPhilly the toy truck will be very special. She said her son smiles every time he sees his dad's picture.