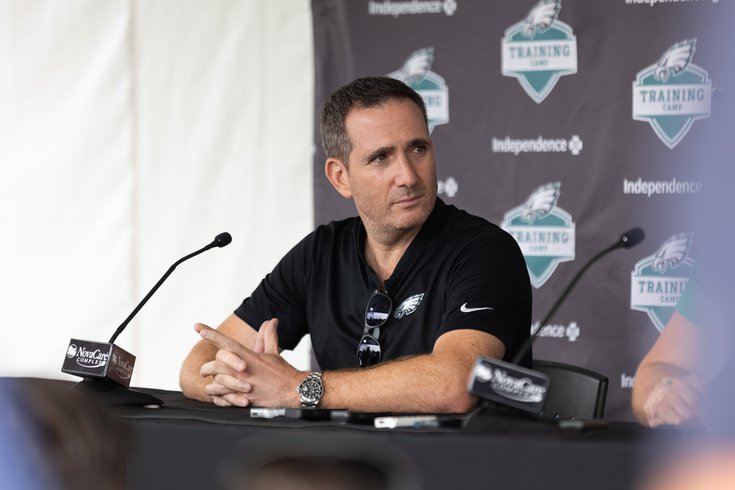 Cutdown day provided some of the best insight into Howie Roseman, the difficulty of his job, and how accuracy matters. All of which having nothing to do with anyone being cut from the team, instead one of the savvier trades made this offseason balanced with the move that wasn’t made (yet).

Thatt was finally made the day after, which seemed like an eternity of asking if Jalen Reagor would ever be traded. We got the answer, yes, to the Vikings.

So lies the problem with Howie Roseman’s job, the extremes that come with it — followed up by the usual “genius” or “fire him” depending on the result. There is little middle ground for Roseman to walk, not after winning a Super Bowl and setting the bar so high. Not after successfully navigating the draft boards or finding a gem in free agency to what he did on Tuesday.

So Roseman did what he’s been doing: correcting a mistake and giving another young player a chance to succeed elsewhere. That’s more the Eagles way than keeping a guy around for no reason. Keeping Reagor on this football team would be a travesty. The Eagles just released a hype video ahead of the season and Zach Pascal was the third person seen. Do you think he wasn’t getting time ahead of Reagor? A.J. Brown, Devonta Smith, and Quez Watkins better not leave the field to justify someone else’s existence.

Reagor wasn’t even the better special teams fit over someone with more speed like Devon Allen, it’s just the first-round tag and love from the front office. We saw the same with Andre Dillard — who is the next target on the block. No good deed or positive service was being done towards Reagor simply by keeping him. Even J.J. Arcega-Whiteside got an opportunity to fail again. Reagor deserved that too.

There was no justification for putting him in the game with the current crop of receivers. We’ve seen special teams errors and it’s not worth the risk for a playoff-bound team. This wasn’t fair to his teammates as they would carry an extra and unnecessary weight if he did happen to get in and mess up. These aren’t things that undo a football team, but so much of this was just a ridiculous tie that needed to be cut.

Credit Roseman and the Eagles for making this move ahead of the season. It had to be done and warrants praise in that all parties are able to move on. They didn’t get much at all in return, but don’t use that as any negative.

The limited back-end picks the Eagles received is market value for a broken receiver — even for a team like Minnesota who needed depth due to injury. What’s truly amazing here is that Roseman reversed a process that he has mastered, possibly as well as anyone in the NFL right now. The trade for Chauncey Gardner-Johnson fully illustrates Roseman at his best. Not many front office personnel can read and understand the room. The latter being about comprehension and figuring out how to take advantage of what you just read.

The trade was on the cheap for a player who has nothing wrong with his skills, rather contract talks broke down. Roseman understood the Saints would have no choice but to part ways with a guy they weren’t paying and the timing of it being at the end of the preseason.

The move works on so many levels, it’s like he hit a same game parlay of circumstances. It brings over a player who now suits up for a team that wants him and will pay him — or give him the shot to make money in the open market. Gardner-Johnson is an immediate fit in Philadelphia, be it team or fanbase. He is all over the place, loves to show off and talk trash, and will have some hilarious celebrations cooked up for this defense. He’s what we all pine for — at least so goes the cliché – in a Philadelphia Athlete. The typical “Glad that guy is on our team not [insert other team]” player.

Lastly, this move fills a need at safety by moving CGJ from the nickel spot where he played in New Orleans. That goes back to a chance of making money but it’s more money than he would have as any nickel cornerback.

This isn’t just some back-end move made by the Eagles at the end of August. This is a perfect microcosm of why Roseman understands this team, the city, and connections between both. The Eagles had to trade Reagor mainly out of desperation, which is fine, teams make mistakes all the time with personnel. The most important takeaway over the last two days is the process that Roseman worked twofold: finding a gem from a team that is desperate to trade a player and recognizing when you are that team.

Cutting ties with a first-round player isn’t easy, especially after just two seasons with the team. Recognizing a mistake was made then acting on that mistake is what keeps a team competitive.