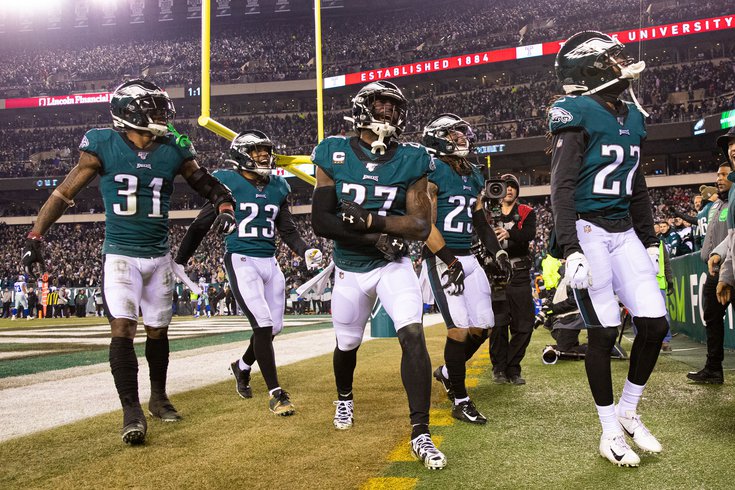 The Eagles' secondary began to take shape on Tuesday, and so far, it doesn't look great.

Day 2 of the NFL's legal tampering phase is in the books, and so far, the Philadelphia Eagles have lost more players than they have gained. The official start of free agency will begin at 4:00 p.m. today.

Here's the Eagles news from Day 1:

Here we'll take a look at what they did on Day 2, with links to the original stories in each header.

They announced that they're moving on from Malcolm Jenkins

We covered this in more depth on Tuesday in print and in podcast form, and won't re-state everything here. Suffice it to say that the Eagles are taking a big risk by letting the leader of their defense go.

Jalen Mills re-signed, and will be moving to safety

It's currently unclear exactly what Mills' role will be in the defense going forward. It was noted that Mills could take on something of a corner/safety "hybrid" role, which might not make him an apples-to-apples replacement for Jenkins. His one-year, $5 million deal doesn't exactly scream starter money to me.

Rodney McLeod is back

McLeod was culpable for many of the big plays the Eagles allowed a season ago, but perhaps they feel that his legs will be springier being an extra year removed from his ACL tear in 2018?

The Eagles have $32 million/year wrapped up in Carson Wentz, and holes all over the roster elsewhere, so a high-priced backup just wasn't going to be a realistic option. Sudfeld will be a placeholder at the primary backup spot for now, but he'll still likely have to earn that title in training camp and the preseason, just like he was tasked to do a year ago.

Howard was a good back for the Eagles in his short time in Philly, and he got more money than anticipated on the open market from a team with all kinds of salary cap space in the Dolphins.

Kamu Grugier-Hill left for Miami too

Grugier-Hill is a young, talented player, and a good fit for a team like the Dolphins that is rebuilding. This loss could be an underrated one for an Eagles team that is light on linebacker depth.

A snapshot of Eagles free agency so far

The Eagles are not a better team than they were two days ago, but there's obviously still plenty of free agency left.