The signature shoe, which features a white base and pearlized royal blue toe box, will become available Thursday

By Brian A. Saunders
PhillyVoice Staff
Lifestyle Sneakers
from 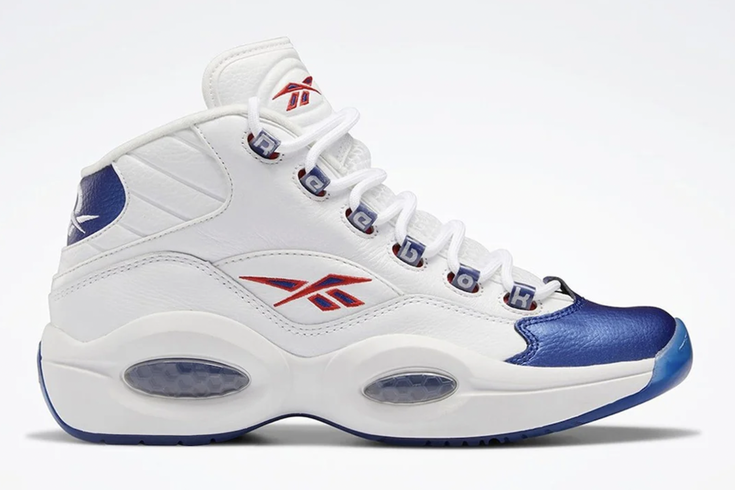 Reebok will release an original colorway of Allen Iverson's first signature shoe, the Question, on Thursday. The shoe is most-remembered for Iverson's iconic crossover on Michael Jordan.

Reebok has re-released many of its signature sneakers from the 1990s this year, keeping with the nostalgia trend that has swept apparel companies.

Its next release is Allen Iverson's Reebok Question Mid "Blue Toe," a pair of shoes lauded as a classic for its white base and pearlized, royal blue toe box. But it's a play that Iverson pulled off during his first NBA season with the 76ers – while wearing the shoes – that really made them stand out.

In a game against the Chicago Bulls on March 12, 1997, Iverson caught the ball at the top of key and twice crossed over Michael Jordan – the reigning NBA MVP – before sinking a pull-up jump shot. The iconic moment still gets discussed on cable networks and in barbershops and bars.

Iverson scored a game-high 37-points in that game. Jordan scored a modest 23 points – for him – as the defending champion Bulls won 108-104.

At noon on Thursday, the sneakers will become available on Reebok's website and at select retailers, including Finish Line and Foot Locker. The sneakers cost $160 in adult sizes, $100 in junior sizes, $75 for kids and $50 for infants.

The shoes, which have been released several times over the past 25 years, are popular among Sixers fans, partly because they pair well with a throwback Iverson jersey and the team's current gear.

Reebok describes the sneakers as "painstakingly reproduced from the original," noting they "luxe touches like a pearlized leather toe and supple upper give you all you crave." The sockliners depict the face of a young Iverson. The shoes come in an exclusive box.

One for the OG, two for the crossover show.

The Reebok Question Mid returns for a 2022 release, with the "Blue Toe" dropping on August 18th at select retailers and Reebok's website for a price of $160. pic.twitter.com/XxyfORMtrl

In July, Reebok released a variation of the Question sneaker that paid homage to Sixers legend Julius Erving. The shoe's colorway featured a red and gold accents and a red Reebok logo. The shoe commemorate Iverson's decision to wear Dr. J's No. 6 during the 2002 NBA All-Star Game in Philadelphia.

Three weeks after Iverson's crossover on Jordan, he set a rookie record with five straight 40-point games – all while donning the Reebok Question sneakers. Over that stretch, he averaged 43.6 points, 7.4 assists, 4.6 rebounds and 1.8 steals.

Iverson went on to win Rookie of the Year, averaging 23.5 points, 7.5 assists and 2.1 steals per game. But the lasting memory of his first NBA season is him putting the moves on Jordan.