A totally visual – but somewhat NSFW – recap of Wing Bowl 25 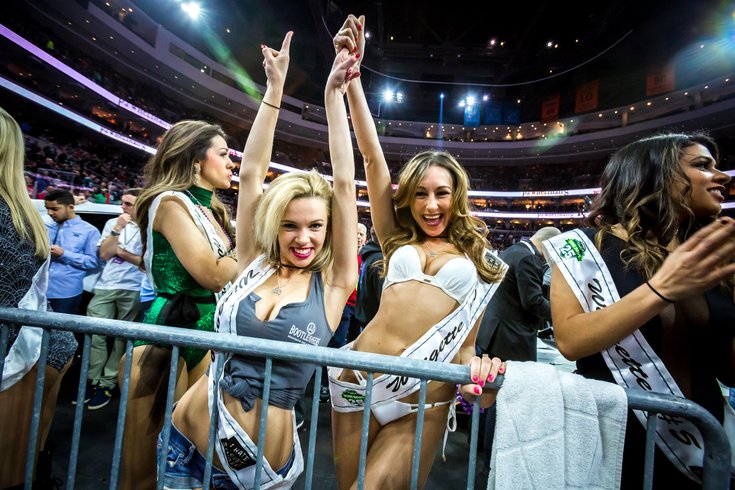 It's almost hard to believe that 10,000 chicken wings can be consumed that quickly, even if you have some of the country's best eaters surrounded by a sold-out arena full of drunk Philadelphians, cheered on by hundreds of scantily clad women.

But that's exactly what happened at the Wells Fargo Center on Friday, as thousands gathered for SportsRadio 94 WIP's Wing Bowl 25, the annual bacchanal that kicks off Super Bowl Weekend and turns what is already a "three-day" weekend for many, into a four-day bender.

There were celebrities, Ric Flair and Coolio, on hand to witness first-time winner Notorious B.O.B. pull off a come-from-behind victory. There was a parade with floats feature things like simulated sex acts between Donald Trump and Hillary Clinton. One featured a clown with kidney stones (mocking Wing Bowl co-creator and PhillyVoice columnist Angelo Cataldi). A 90-something-pound woman ate five and a half pounds of food in just over three minutes – not long after she ate 95 wings in five minutes.

As one might expect, there was no shortage of women eager to put their assets on display for 15 seconds of Jumbotron fame. There was beer. So much beer. Hell, there was even a marriage proposal.

So, in case you were sleeping – or, you know, actually had to go to work – here's a look at what you missed on Friday morning, with an emphasis on the visuals. [And just do be on the safe side, you may want to wait until your boss isn't looking.]