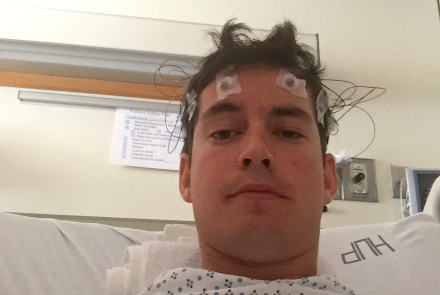 Local musician Zackary Zortman, 29, a terminal brain cancer survivor from York, Pa., recently released the song and music video for "Meant to Live," which is available on iTunes. Zortman, who goes by the stage name Zackary William, underwent surgery to remove the cancerous brain tumor at Pennsylvania Hospital.

Music filled the operating room at Pennsylvania Hospital while Zachary Zortman lay awake on the metal table with his brain sliced open.

But the music wasn’t coming from a set of speakers or headphones. Zortman, 29, who was undergoing brain surgery to remove a cancerous tumor, was singing.

As Dr. Zarina Ali, the neurosurgeon leading the operation, put it in a Facebook post, she had asked Zortman, a musician and vocalist from York, Pennsylvania, to sing during his surgery “to try to preserve this important function for him.”

His new song, “Meant to Live” – one of several songs he belted out on the operating table six months ago – was recently released along with a music video and is available for download on iTunes. A portion of the proceeds will be donated to the American Cancer Society.

Zortman, who has an undergraduate degree from Shippensburg University and a master's in school counseling from West Chester University, said he wrote and produced "Meant to Live" to both help himself get through the terminal cancer diagnosis and journey forward and to inspire others walking a similar road.

"Life doesn't have a stop button," Zortman, who goes by the stage name Zachary William, said on Friday while quoting his own lyrics. "Perspective is a thing they say that gets shot your way when your seconds, they become your days."

In other words, he said, "many, many things" change with a terminal cancer diagnosis, but change isn't an end.

"I have a desire to fight, and I mean really fight."