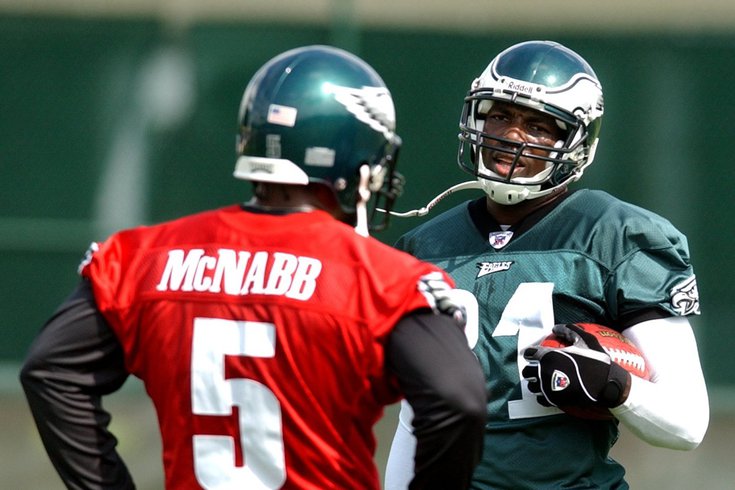 The long-standing feud between Terrell Owens and Donovan McNabb always finds a way to reignite itself just about every year. It usually happens when one is asked about the other in an interview.

The Hall of Fame wide receiver was talking about celebrity boxing matches and mentioned that he had once been asked who his dream opponent would be. His answer? Yup. You guessed correctly. The former Eagles quarterback himself.

Owens said that he would knock McNabb out because of all the pent-up anger T.O. still holds over their bitter relationship.

"I'll be controlled," Owens said. "It'll be controlled anger. I'd be like a Navy Seal. They're cool and calm under all conditions. But there would be a fire burning inside of me."

McNabb had yet to respond to Owens' latest comments on their frosty relationship.

Let's make this gimmicky celebrity boxing match happen right here in Philly at Lincoln Financial Field. Sell the place out with rabid Eagles fans. Have Merrill Reese call the action. Brian Dawkins can give us some round-by-round analysis. Andy Reid can ref the match. Maybe even raise some money for a local charity to make it meaningful.

Let's settle this crap once and for all and put this dumb beef to bed and move on. Heck, it could even be the premise for a future "Rocky" or "Creed" film.

Owens' remarks are just the latest twist and turn in his and McNabb's stupid beef that has lasted since 2004.

Owens accused McNabb in an interview last December of drinking the night before Super Bowl XXXIX when the Eagles lost to the Patriots. The former Eagles wide receiver's comments only furthered long-standing claims that McNabb allegedly threw up in the huddle during the 24-21 loss in Jacksonville, Florida, an accusation which McNabb has repeatedly denied.

McNabb said in an interview in January 2020 that the wide receiver's drama helped break up the Eagles at their peak in the mid-2000s.

Owens called McNabb two-faced in an interview ahead of the Eagles' Super Bowl LII win over the Patriots in Minneapolis in 2018. He also said in an interview in 2017 that the roots of their feud were born when McNabb allegedly disrespected him by cursing out Owens in front of their teammates in the huddle during a game in 2004 after McNabb didn't throw a ball Owens' way.

It's safe to say that their petty feud doesn't appear to be ending anytime soon.