Much of the discussion centered around whether or not Owens should have been voted into the Hall of Fame earlier this year – or, rather, whether his off-field antics were the reason he fell short of being enshrined in Canton.

And although his time in Philadelphia lasted less than two years, nearly half of the interview focused on his time with the Eagles, specifically the ugly way in which it ended.

You can watch the entire thing below, but I went ahead and transcribed the final seven and a half minutes (which includes all the Eagles-specific questions). I've also broken it down into smaller segments so you don't have to read/watch the full interview if you don't want to.

WHAT SPARKED THE MCNABB FEUD?

Skip Bayless: “You go to Philly and you sign another big contract. What was it – seven years, $49 million? And everything was peachy-keen from the start, because it was you and Donovan [McNabb]. You were roommates, soulmates all through that first training camp. And you know what happened – it started to fall apart [again] with Donovan. And one thing led to another; you didn’t think he defended you enough…"

T.O.: “That was one of the incidents, but there was a game, I can’t remember if it was… we were playing the Giants or the Browns or whatever the case may be. But throughout the course of practice, there were designed specific plays for myself. [We] ran it over and over, knew it was going to work in the game. [I] ran that play to a T – open, wide open. I didn’t get the ball. I could hear my teammates from the sideline, ‘Why didn’t he throw the ball?’

"So I go back to the huddle and I was like, ‘Dude, I was open.’ And you know what his response was to me? ‘Shut the F up.’ That was disresp–"

Skip: "Was that in the first year?"

T.O.: "I only played a year and seven games [with the Eagles], so yeah, it was in the first year. That was disrespectful. I’ve never disrespected any of my teammates to that degree. And I didn’t make a stink about it on the field; I let it ride. I didn’t argue about it. I said, ‘Cool.’

"But I went in the locker room and addressed him after the game, man-to-man, knowing the things that had happened in San Francisco. I didn’t want that to happen in Philly. [I] went up to him, addressed him, told him I didn’t appreciate that and don’t let that happen again. For whatever reason – I don’t know how he took it – he didn’t like it. And that’s how things started to unravel.

"So these are things that you aren’t made aware of that I’ve tried to do to make myself a better person and a player based on things that happened in San Francisco."

Skip: “Is it fair to say you and Donovan then just fell completely apart?”

T.O.: “I don’t know what happened to Donovan. Trust me, when we got in between those lines, I did my job. I didn’t necessarily have to talk to him on the football field, [in] practice or whatever. For me, it wasn’t an issue.

"As the season rolled along, it was people that brought it to my attention that it was an issue. To go into Lincoln Financial [Field], do what I did, have 70,000 people chant your name, ’T.O., T.O.' Maybe that got under his skin. But, for me, I didn’t have anything personally against Donovan, because I went there to achieve the goal of helping them get to the Super Bowl. That was my main concern.”

Shannon Sharpe: “We’ve talked before about this at length, but … so you’re saying from the moment that Donovan undressed you in front of your teammates, and you having a conversation with him after the game, that was the start, the beginning of the end of your relationship?”

T.O.: “I think it was, but again, I tried to be the better person, unbeknownst to you and others that are getting sideline information.”

WHY IS MCNABB'S STORY DIFFERENT?

Skip: “I’ve heard Donovan’s story straight from his lips, and it’s the other– it’s upside down from your story. But go ahead”

T.O.: “You can ask the teammates. You can go to Philly, you can ask the some of the staff. Again, even from Ray Sherman, who coached me in Dallas. He basically has said, ‘Tell them to call [me]. Talk to [me]. These are the guys that have coached me. If you want to know the truth, call him."

WHAT ABOUT ANDY REID, OTHER COACHES?

Skip: “OK, but the head coach in Philly and the coordinator in Philly, you began to have issues with and feud with Andy Reid and Brad Childress, right? You had some issues with them.”

T.O.: “Andy Reid, I love Andy Reid. Never going to say anything bad, best coach I ever had.”

Skip: “Brad Childress, not so much?”

T.O.: “For whatever reason, he probably had his perception prior to me coming there. So again, it is what it is.”

WAS PLAYING IN SUPER BOWL A BAD IDEA?

If they would’ve gave me a couple more we probably would have won, Skip... Come on, man, are you serious?

Skip: “So you didn’t love your contract after two years, your seven-year deal, and you began to have issues with management. And it got so bad in Philadelphia that Terrell Owens, again at the peak of his powers, got deactivated – well, suspended and then deactivated. They just basically sent you home. And then the next year they released you, right? That’s a pretty ugly end to what looked like a fairy tale Philly story.”

T.O.: “Well, you know, Skip, it’s sad to say that I went there; I played; I did beyond what was expected; I went to the Super Bowl; I played with two screws and a plate in my ankle, broken fibula; played in that game. And guys like yourself call me selfish for playing in that game.”

Skip: “That’s because three of your prominent teammates said you forced your way back in.”

Skip: “That you just weren’t ready to play and the Patriots knew it and you were no real threat to them, and yet Donovan force-fed you the ball. What’d you have, nine [catches] for 122?”

T.O.: “That’s force-feeding me the ball? If they would’ve gave me a couple more we probably would have won, Skip. I can’t force my way into a game. If I wasn’t medically cleared to play or they didn’t think I was ready to play, they wouldn’t have put me on the football field. I went to my doctor, Dr. Myerson, he didn’t clear me. I had to sign a waiver from the Eagles to play in that game. Come on, man, are you serious?

Skip: “They were serious. That’s what they said.”

Even Brian Dawkins and guys on that defense said that I brought swagger to that team that they needed to get over the hump.

Shannon: “[Playing through that injury] should be a plus, not a negative.”

T.O.: “Exactly. But according to them, I was ‘selfish’ to play in that game. If it’s anybody else that would’ve done the things I did –”

Skip: “But for the record, they did win two playoff games to get there without any Terrell Owens.”

T.O.: “What does that mean? So you’re just discounting what I did during the regular season?

Skip: “No, you had a great regular season.”

T.O.: “The swagger I brought to that team that was already there.”

T.O.: “Even Brian Dawkins and guys on that defense said that I brought swagger to that team that they needed to get over the hump. So whether I played in two playoff games or not, that doesn’t have any bearing on what I did throughout the regular season.”

Shannon: “And you were voted First-Team All-Pro, correct?”

WHY TAKE PARTING SHOT AT MCNABB?

I said I don’t know anything about Donovan throwing up in the huddle... And you guys, as media members, you all spun it and said I threw him under the bus.”

Skip: “And then you did take one more shot at Donovan, saying you weren’t the one who got tired in the Super Bowl.”

T.O.: “No, no, no. First of all, Skip, I didn’t say that initially. Hank Fraley and Freddie Mitchell said that. I never even saw Don–“

Skip: “How’d it get attributed to you?”

T.O.: “Because I did an interview in Miami and the guy asked me something about being tired, about this very comment. I said I don’t know anything about Donovan throwing up in the huddle. This was my response: I said if anybody should’ve been tired, it should’ve been me. Because I didn’t practice for about a month and a half and I went out there and played the way I did. That was my response. And you guys, as media members, you all spun it and said I threw him under the bus.”

Skip: “That’s a fair point. I thought you said it.”

The interview ended with Skip Bayless making this face, so I'm going to chalk it up to a win for Terrell Owens. 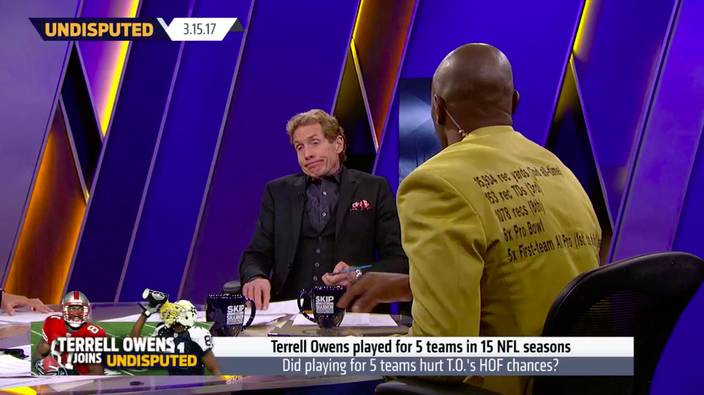 But honestly, T.O. secured the victory the minute he walked on set in that gold jacket with his stats printed on the back.