5 over/unders for Eagles vs. Dolphins 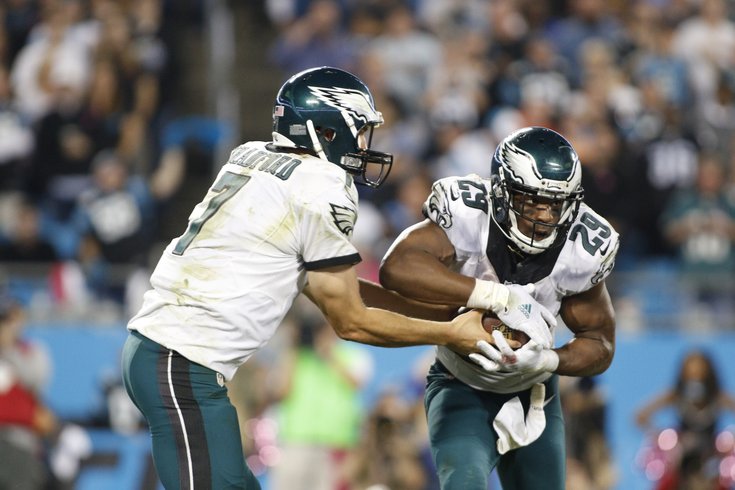 The Philadelphia Eagles have been much more successful running out of the shotgun, and that could be bad news for the Miami Dolphins.

After going 2-0 in their first two games under new head coach Dan Campbell, the Miami Dolphins are suddenly struggling again and are coming off two straight losses to AFC East foes, the Bills and Patriots.

Meanwhile, the Philadelphia Eagles have won three of their last four games, with their only loss coming on the road to the 8-0 Carolina Panthers. Hopefully, that won't leave the players feeling overconfident when they welcome the Fins into the Linc on Sunday for their first home game since mid-October.

It's a big game for the Birds, who need to back up last weekend's win over the Cowboys with a few more wins over a trio of teams currently below .500 -- the Dolphins, Bucs and Lions. Not only are these the kind of games you need to win if you want to make the playoffs, but their followed by matchups against three teams who are a combined 19-6 and are all currently projected to make the playoffs -- the Patriots, Bills and Cardinals. And after starting the season 1-3, Chip Kelly and Co. have left themselves little to no room for error moving forward.

Here's a look at some of the things I'm expecting to see Sunday afternoon at the Linc.

[Note: I've also taken a look back at my season-long over/unders for the Eagles to see where they stand now that have of the 2015 schedule is in the books. You can check those out here: Part 1 | Part 2]

That's the number currently being offered at topbet.eu, and if you go by our staff predictions, it's not that far off what we're expecting to see. Jimmy Kempski and I both see them hitting the over, with predictions of 53 and 54 total points, respectively. Meanwhile, Rich Hofmann has them falling just short, with a combined total of 48 points.

If they are going to reach that number, however, it will likely need to be done largely by the Eagles offense, as the D has held opponents to an average of 14.7 points per game at Lincoln Financial Field. As for the offense, the Eagles are scoring 25.3 points per game at home. That still leaves them 10 points shy of hitting the over, but given the recent improvement we've seen out of Sam Bradford and the offense, coupled with the fact that the Eagles should be able to run all over Miami, I'm taking the over. I mean, I kind of have to after my prediction already pointed to the over.

I just pointed out that the Eagles should be able to run all over the Dolphins, and it's all going to start with DeMarco Murray. The former Cowboy has averaged 19 carries and 86 yards per game over his last four starts, and those numbers should be easy to hit against a Miami defense that is allowing 4.9 yards per carry and 142 yards per game to opposing backs.

Yes, the Dolphins have Ndamukong Suh up front, but that hasn't done much to improve their run defense. And if Kelly wants to run his backs out of the shotgun, this might be one of the times you don't want to complain. Miami is surrendering 6.7 yards per carry to opponents when they run out of the shotgun. And it's not like it's a terribly small sample size, either.

Take a look at the Dolphins splits in that regard and how they compare to the NFL averages. [The Dolphins numbers are in orange.]

As you can see, they're much closer to an average run-stopping team when the QB begins under center. But when he starts in a shotgun set, like the Eagles do nearly 90 percent of the time, they typically struggle more than most. And in case you're wondering what Philly's offensive splits look like for running out of the shotgun vs. under center, they're averaging just 2.9 yards per attempt on 50 plays under center compared to 4.7 yards per attempt on 176 carries starting in a shotgun set.

I think of Murray gets the attempts, it's only a matter how long it takes for him to cross the 100-yard threshold for the first time this season.

Miami has 16 sacks on the season, but that number is quite misleading ... for a pair of reasons.

First, 15 of those sacks have come over the Dolphins last four games. Through their first four, they had just one sack (no, that's not a typo). On its face, that suggests an Eagles offensive line, which will likely be without Jason Peters, may struggle Sunday. However, that's where part two comes in: seven of those sacks belong to Cameron Wake -- including four against the Titans alone. But the Eagles won't face Wake, who is done for the season with a torn Achilles' tendon. When you take his numbers out, the Dolphins are suddenly averaging just two sacks per game since Campbell took over following their Week 4 loss to the Jets.

And on the season, they're averaging just over one sack per game. And considering their run defense is among the worst in the NFL, the Dolphins may not have a lot of chances to get to Sam Bradford if Chip Kelly chooses to keep the ball on the ground. It's been successful for the Birds ever since their god-awful start, so I expect Kelly to lean on Murray and Ryan Mathews on Sunday.

To say the Dolphins quarterback has been inconsistent this season would almost certainly be underselling it. In eight games this season, Tannehill has as many games with a passer rating of 100-plus (three) as he has games with a rating of less than 65. And that drastic deviation makes his season rating (88.7) look average, although it's been rare to see him play and evaluate him as anything other than great OR awful. There's been very little in between.

If I had to guess -- and that's the point of this entire exercise, after all -- I think Tannehill struggles to reach his season mark, due in large part to the Eagles defense being able to limit passing yards and force turnovers at home. In their three home games, opposing offenses are averaging just 236 passing yards and three turnovers per game.

One way Tannenhill can prove my last prediction wrong is by protecting the football. He's only thrown two interceptions in his last three games, but in his previous three, the third-year QB threw seven picks.

Meanwhile, the Eagles defense will do its best to turn Tannehill back into the QB he was before his head coach was fired and replaced by Campbell, the former tight ends coach. The Eagles front seven will try to get pressure -- they have eight sacks in their three home games -- and the defense as a whole will look to again reach their goal of three takeaways per game after forcing just one against the Cowboys on Sunday night. That being said, Billy Davis' unit was able to hit their mark in each of the Eagles previous three games.

Now, back at home -- where the Birds average, coincidentally, three TOs per game -- for the first time since Week 6, I expect the defense to pick up where it left off against Eli Manning and the Giants.