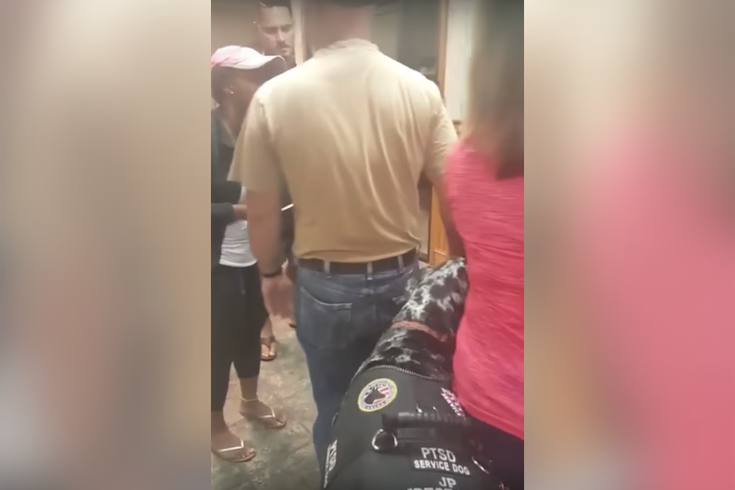 A woman yells at a man for bringing his service dog into a Delaware City restaurant.

A Delaware restaurant in the middle of a viral video that shows a woman berating a military veteran for bringing in his service dog plans to hold a fundraising event to raise awareness for those with post-traumatic stress disorder.

Kathy's Crab House & Family Restaurant in Delaware City took to Facebook on Wednesday to say "how sorry [it is] over the embarrassing turn of events."

The establishment says that it's finalizing details but intends to sponsor a fundraising effort for veterans and service animals through Montana Wounded Warriors, an organization that takes wounded veterans on outdoor excursions in Montana.

"We would like to take what may have been perceived as a negative incident and turn this into a positive opportunity, by educating and enlightening the public about the role of service animals and how they help and serve many returning veterans who have suffered serious wounds and injuries, as well as those veterans suffering from PTSD," Kathy's Crab House wrote in the post that's been shared more than 2,100 times.

The three-minute-long video taken in the restaurant shows a woman, identified by The (Delaware) News Journal as Delaware resident Ciara Miller, yelling about the Great Dane who belongs to retired U.S. Army Master Sgt. Bill Austin being allowed in the establishment. The dog, named JP, is wearing a "PTSD service dog" vest.

Miller said that it's "disgusting to have an animal inside of a public restaurant" and suggests that it have a separate section for animals in the viral video that's amassed hundreds of thousands of views.

Service animals are permitted into public and private businesses under the Americans with Disabilities Act.

"I really am hoping something positive comes out of this," Austin told The News Journal. "This is about bad behavior."

Miller told the publication that she's been the subject of many threats and online harassment following the video.

"I am frightened to send my daughter to school with the level of verbal content is being said to and about me, my family and I based on these fake articles," Miller said in an email sent to the news site.

Miller told FOX29 on Wednesday that the video doesn't tell the full story and that she was called racial slurs not heard in the clip.

"No, actually I don't regret how vocal I was," she told the news station. "I reacted based on the way they reacted to me."

Watch the video, which contains profanity, below: