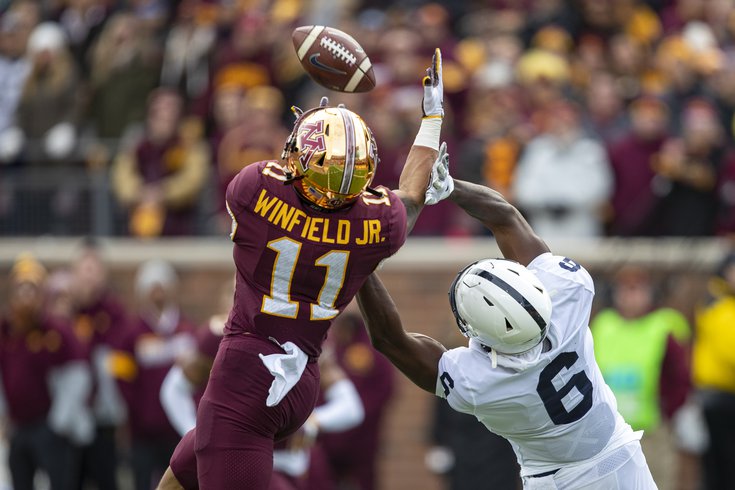 Leading up to the 2020 NFL Draft, we've been taking a look at each of the Philadelphia Eagles' positional groups, determining if the Birds are likely to select a player at each position with one of their eight picks, as well as note some players who make sense.

Today we'll close out the series with the safeties. First, the depth chart:

It took a half decade for the Eagles to find a good safety after they let Brian Dawkins get away in 2009. They signed Malcolm Jenkins in free agency in 2014, and Jenkins made outstanding contributions to the Eagles for six years, both on the field and in the locker room.

To be determined if the Eagles will face another similarly bad stretch at safety after releasing Jenkins this offseason. At the moment, on paper, the safety spot isn't very inspiring. Rodney McLeod is coming off a bad season, but the team hopes that being another year removed from an ACL tear will yield better results. Opposite McLeod is Jalen Mills, who will be sliding into Jenkins' old role as a do-everything guy. That's a lot easier said than done.

The team did add a young No. 3 safety in Will Parks to the group, instead of opting for an old head in the mold of Andrew Sendejo or Corey Graham. And then there's Rudy Ford and Marcus Epps, who both stunk in their first year with the team in 2019.

And so, if you're a fan of guys like LSU's Grant Delpit or Alabama's Xavier McKinney, don't hold your breath.

Some safeties who make sense for the Eagles

In his four years at SIU, Chinn filled up the stat sheet, compiling 243 tackles, 13 INTs (with at least 3 INTs in every season), 31 pass breakups, 6 forced fumbles, and a blocked kick, playing both safety and corner.

He then had a great pre-draft process, as he was one of the best players during the Senior Bowl week of practices, followed by an impressive performance at the Combine:

Chinn is thought by some draft analysts to need to improve his recognition skills, but with his combo of size and athleticism, it's hard to imagine he makes it out of Round 2. If he's there at 53, the Eagles should absolutely consider him as some sort of safety/linebacker hybrid.

I loved Winfield's father as a player when he was still in the league. He was an undersized corner, but tough as hell, and a playmaker. The younger Winfield, who plays safety, is a playmaker too, as he had seven INTs in 2019, fourth in the nation, to go along with two forced fumbles, with some of those plays coming in big moments or big games.

Like his father, Winfield is undersized at 5'9, which the Eagles don't seem to care much about at safety, but other teams will be turned off by that, and makes his round projection tricky.

Burgess doesn't get much attention because he only started one season at Utah, and had just one career INT. However, despite that lack of playing time, Burgess is a smart player with the versatility to play safety and slot corner. At the Senior Bowl, he looked good covering both receivers and tight ends.

(Thread) #Utah S Terrell Burgess @TiTaniumT98
Burgess is not getting enough attention. Hyper-versatile with the ability to play deep, in the box, and man up. Extremely smart player with great instincts as shown here #NFLDraft pic.twitter.com/7oQfGsWL59

Get ready to start hearing (and maybe eventually getting annoyed by) the word "positionless" from the Eagles, in reference to guys who can play multiple positions in the secondary. Burgess fits that.

Blackmon played his first three seasons at Utah at corner, and he moved to safety for his senior season. Of course, any safety with corner experience in their background is going to be of interest to Jim Schwartz. Watch him attack with speed downhill:

Blackmon has some pretty ugly tape early in his transition to safety, but got much better as he has eased into his new role. In 12 games in 2019, he had 60 tackles, 4 INTs, 2 FFs, and 1.5 sacks, before he tore an ACL in December. He believes he'll be fully healthy again in mid-October.

I believe that any team that drafts him has to do so expecting to redshirt him his rookie season. That makes more sense to me at the back end of the fourth round, as opposed to, you know, the second round.

As a ball hawking player with good speed, he would make sense in the Rodney McLeod role in the Eagles' defense.

Carter played some slot corner early at Bama, but he made a move to safety in 2019. He can play free safety, strong safety, slot corner, or the star position in Alabama's defense, and is widely thought of as one of the smartest players on the team. While that might make you think of him as a Malcolm Jenkins replacement candidate, he does not have Jenkins' athleticism.

I like Carter as something of a sub-package, big nickel type of player, with added value on special teams.