It doesn't impact our betting or viewing habits of professional sports, so why do we pretend to care? 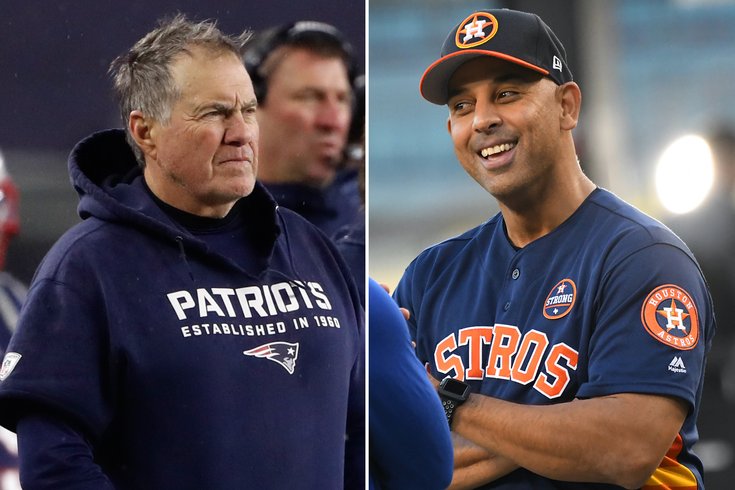 It's Boston. The year is 2023 and we are in the middle of two historic moments occurring simultaneously. At age 46, Tom Brady is looking to secure his seventh Super Bowl ring, playing in his 11th — let’s just say he lost another one between now and then — in his unbelievable career. The second is another, yet brand new, scandal surrounding the Patriots. This time there are multiple accusations that the team hacked the helmet-to-sideline radio, infiltrating both sides of the ball. The team allegedly benefitted from hearing conversations between coach and quarterback and coach and middle linebacker, while calling their own plays as based on what they were hearing.

Sure, TV and radio shows are going nuts, with all the regular news channels locked in on yet another story surrounding the Patriots cheating. But the most important takeaways will be: 1) We won’t stop watching. 2) We won’t stop betting.

The above hypothetical isn’t too far from reality when you see how rapid technology is advancing combined with our increased ability to simply not care about cheating. People I spoke with on Twitter, on my radio shows or just in general seemed to have the same reaction to the Astros stealing signs. All of them pretty much came back with something to the effect of, “I thought everyone steals signs.”

Baseball may not be the most popular sport, but it is one of the big four in this country, and it is already accepted as full of cheaters. After all, we watched as the “steroid era” provided endless highlights on TV and did wonders for attendance. So sign stealing? It's just assumed that's been going on forever, largely because we get people telling us just that.

"We had a system in the old Comiskey Park in the late 1980s - the Gatorade sign out in center had a light, there was a toggle switch in the manager's office and camera zoomed in on the catcher," Jack McDowell said on Mac Attack on WFNZ. (c/o radio.com)

The big question is this: Why should fans continue to care when it clearly doesn’t impact our viewing and betting habits? McDowell opened this door with the above quote about Tony La Russa because he was upset certain players were targeted for cheating. Even the former players don’t care! I don’t care! Please stop acting like you do. Gaining a competitive edge, cheating, stealing signs, videotaping practices, hacking a Bluetooth — do whatever it takes!

Is there anyone on the planet who follows baseball that will refuse to acknowledge the Astros winning the World Series? Probably not. Do people ignore the Super Bowl won by the Patriots during Spygate? Nope. Would you allow anyone to take away a Philadelphia championship if one of our own teams was caught cheating? I certainly hope not.

The problem is the people who are paid to get you to care about stuff — the same people who rarely believe in the stuff they say they “care” about – want you to get all riled up. The message? That sports are possibly impure. Yet we know this, and based off our past actions, we simply don’t care. I want my teams doing anything — except hurting someone else — to gain a competitive advantage.

The NFL is way too intertwined in the fabric of our society. To a lesser extent, so is the NBA and even MLB. We don’t “need” the latter, but the former is so important at this point, our country stands a better chance of folding before the NFL. The most watched sport in the country, the most bet-on and heavily played fantasy sport, has a team that’s been outed as a multiple offender. This isn’t some bottom feeder, it’s the most successful team of all-time.

Don’t be shocked if you see the Patriots in the Super Bowl three years from now, fighting yet another infamous scandal, while the whole world watches and places another bet for them to cover.

I couldn’t help but laugh when I saw this response to a tweet about cheating in sports:

I feel like Gabe was so ass backward.. he was controlling opponents buzzers by accident . 😂😂😂

Just thinking about Gabe Kapler having a buzzer, but it going to the wrong team or player has me in tears. I don’t believe it’s just the top teams in sports who cheat. We need to uncover all the failed attempts at cheating by bad teams. Guaranteed comedy.

Two names have found themselves on the front page of their respective sports discussions. Both with a mixed history in Philadelphia. You already know this city isn’t for everyone, but just because someone "fails" here doesn’t mean it’s our fault. You can read my thoughts on why I’m rooting for Andy Reid here, but just like Reid, Markelle Fultz is being brought up with a negative light on Philadelphia.

We don’t need to go back down the road of how many of us supported him until we realized the fit – both on and off the court – wasn’t going to work. But what the heck is this?

Markelle deadass sat and listened to everyone hate on him for two straight years, all the while knowing what he was capable of. That's elite mental toughness. pic.twitter.com/oDC0JHV4fK

Look, fighting fire with fire on social media is as natural as breathing air, but we have an opportunity here. We can educate those outside of the city, no matter how ignorant they sound.

We are all rooting for Andy Reid (or at least we should be) and I think people would be generally happy for Mr. Fultz if he finds peace in Orlando. We gave the kid a standing O for goodness sakes.

Super Bowl Props are out! Let's examine a few of the best...

WILL EITHER J. LO/SHAKIRA FIRST ADDRESS AUDIENCE IN SPANISH?
No -200
Yes +150

“Bienvenidos a Miami!” How hard is that? Take the dog here. Play to the crowd, not the corporate crowd flown in from Tonganoxie, MO.

You can get 4-to-1 odds that neither show any form of cleavage, but that's one underdog that no one wants to see pay out. Two talented artists who happen to be beautiful, take both.

Not even cleavage can save us if this happens.

Pretty strong odds that Mr. Worldwide will find his way on stage. Let’s hope it’s for moral support. I’d rather hear him cover “Miami” than any of his songs.

Watch this thing hit and of all people it’s Pitbull...