The 2018 schedule has Phillies opening on road, also brings Yankees to town

The Phillies are on tap to open a season on the road for the third straight year, according to a tentative 2018 schedule. ... which was obtained by PhillyVoice in late August but made official when issued by the team on Tuesday.

Opening Day has the Phillies in Atlanta on Thursday, March 29. The season-opening road trip continues on Friday and Saturday at Sun Trust Stadium that before a rare off-day on Sunday prior to a three-game series at Citi Field against the New York Mets during the first week of April.

The 2018 home opener at Citizens Bank Park brings the Miami Marlins to town on Thursday, April 5 at 3:05 p.m. The Phillies will play 16 of their first 28 games at home, including a 10-game homestand against the Pirates, Diamondbacks, and Braves at the end of April.

The longest road trip of the season takes the Phillies to three of the best ballparks in the National League, from Dodger Stadium (May 28-31), to San Francisco’s AT&T Park (June 1-3), and finishing up at Chicago’s Wrigley Field (June 5-7).

One other schedule wrinkle first reported by long-time Pittsburgh writer John Perrotto on fanragsports.com last month: the Phillies could play a home game in Williamsport next summer. The second annual Little League Classic could have the Phillies playing host to the New York Mets on Aug. 19 ... a game time that is currently listed as "TBA" on the Phillies 2018 schedule.

While the season will once again begin on the road, the Phillies are on tap to finish at Citizens Bank Park for the fifth straight season. A three-game season-ending series against the Atlanta Braves (Sept. 28-30) falls after a road trip through Atlanta and Colorado. 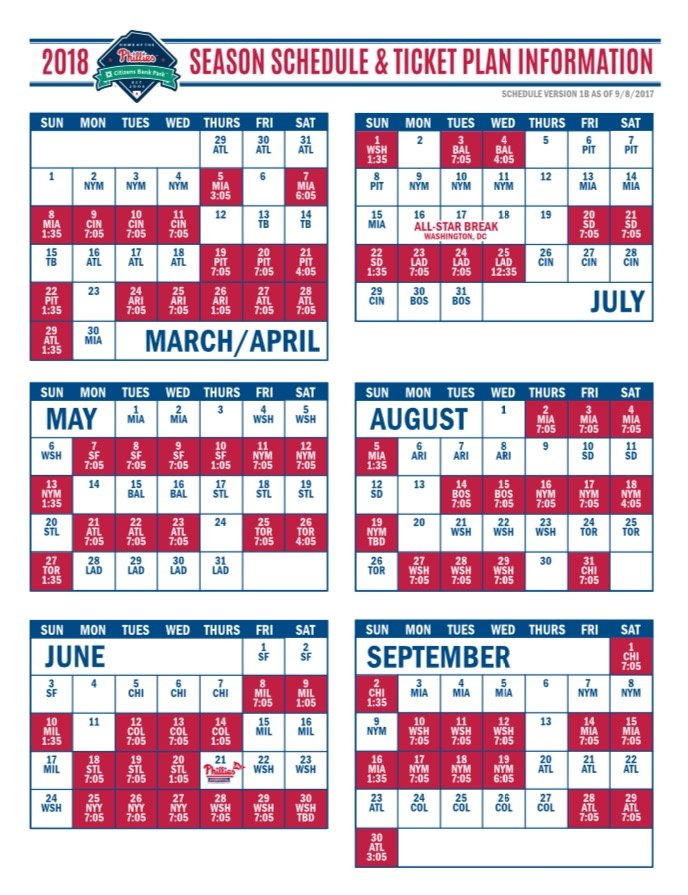