From trading for Marquise Goodwin to drafting a Temple linebacker, here's what the Eagles did... 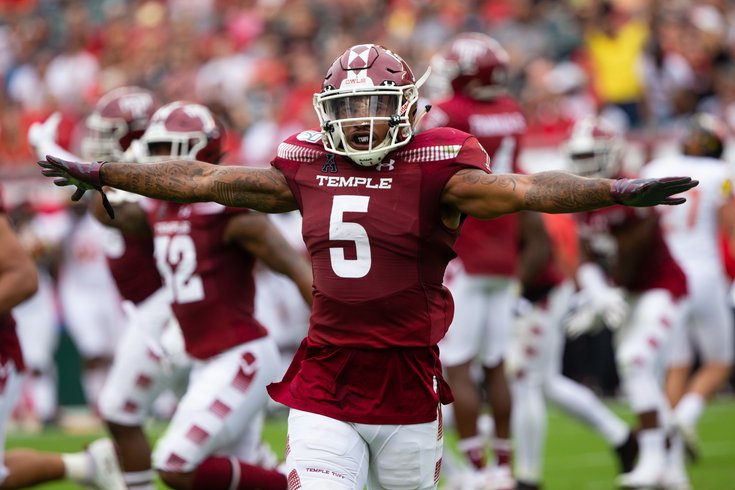 Temple Owls linebacker Shaun Bradley could find himself playing at the Linc again in the fall ... this time on Sundays.

The 2020 NFL Draft is in the books. It was certainly an interesting one for Howie Roseman and the Eagles, as the Birds took quarterback Jalen Hurts in the second round after grabbing a speedy wideout in Jalen Reagor on the opening night.

Saturday was full of trades for the Eagles — including one that landed them another deep threat receiver in 49ers' Marquise Goodwin — and when the dust settled, the Eagles made seven picks on the final day, including even more burners for Carson Wentz, some linebackers and a pair of offensive linemen from Auburn.

You can read more of our coverage of the NFL Draft here, and scroll back through the live updates below to see how it all unfolded.

UPDATE [6:09 p.m.] — The Philadelphia Eagles selected Stanford linebacker Casey Toohill with the 233rd-overall pick (seventh round) of the NFL Draft. You can read more here.

Barring a trade that's the Eagles final pick of the draft.

UPDATE [5:10 p.m.] — With the 210th-overall pick in the 2020 NFL Draft, the Philadelphia Eagles took their second Auburn offensive linemen of the day when they drafted tackle Prince Tega Wanogho. Read more.

Earlier, with the 200th-overall pick, the Eagles picked speedy wide receiver Quez Watkins from Southern Mississippi. You can read more on him, here.

UPDATE [4:32 p.m.] — With the 196th-overall pick in the 2020 NFL Draft, the Philadelphia Eagles selected hometown talent Shaun Bradley, a linebacker from Temple and South Jersey native.

With the 196th pick in the 2020 #NFLDraft, the #Eagles select LB Shaun Bradley.#EaglesDraft | #FlyEaglesFly pic.twitter.com/K2qtPKN0Kw

You can read more on him, here.

Earlier, the Eagles selected Boise State WR John Hightower with the 168th overall pick. You can read more on him, here.

UPDATE [2:59 p.m.] — According to multiple reports, the Eagles have traded for 49ers wide receiver Marquise Goodwin. And it apparently didn't cost them much.

You can read more on Goodwin here.

The Eagles, after trading back with the Cowboys, also traded the 164th-overall pick to the Dolphins, so stay tuned...

UPDATE [2:10 p.m.] — The Eagles were scheduled to make back-to-back picks to end the fourth round. However, they only made one selection — Auburn offensive lineman Jack Driscoll with the 145th-overall pick — and traded the other pick (146) to the Cowboys.

You can read more about Wallace here.

The first two days of the 2020 NFL Draft are in the books, and in case you missed it, the Philadelphia Eagles' made some unexpected moves.

• In Round 1, they found their speed receiver in Jalen Reagor.

• In Round 3, they took a linebacker who isn't expected to contribute in the regular defense anytime soon in Davion Taylor.

MORE: What the rest of the NFC East did on Day 2 of the draft | Why in the world did the Eagles draft QB Jalen Hurts? | Highlights, scouting reports and fit for Eagles' second-round pick Jalen Hurts

What's in store for Day 3? Who the hell knows! Be sure to check out our Eagles draft board to follow along, as well as 15 players to watch who could be Eagles targets in Round 4.