The former Eagles safety was an active member of the community during his six years in the city. He should make it his retirement home 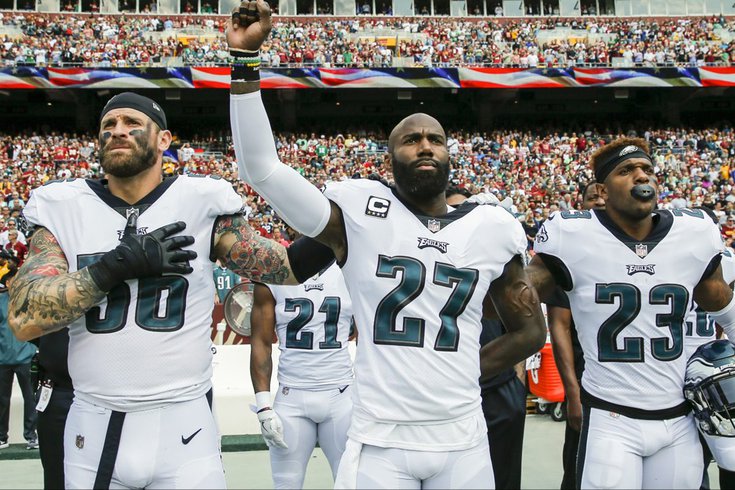 Malcolm Jenkins dedicated much of his six years in Philadelphia to advocating for social justice reforms and improving relations between police and Black communities. Above he is shown raising his fist during the playing of the National Anthem before a game in 2017. Also pictured are teammates Chris Long, left, and free safety Rodney McLeod.

Like most Eagles fans, I was bummed when Malcolm Jenkins left the Birds after the 2019 season.

The former safety was the heart and soul of the defense for six seasons, earning three Pro Bowl nods and helping the Eagles to their first Super Bowl title.

Jenkins, who never missed a game while wearing the midnight green and white, was a consummate leader on the field.

It was also a bummer to hear what may have caused Jenkins' departure from the team. Beyond the contract differences, reports emerged that Jenkins may have been let go in order to hand the locker room over to Carson Wentz — a player whose leadership qualities were constantly questioned until he was traded after the 2020 season.

But what may have bummed me out the most was that Jenkins was more than a football player during his time in Philadelphia.

Jenkins was a leader in the community through his advocacy work and charitable contributions. He set an example as a community activist and took pride in the responsibility of being a role model for others.

The New Jersey native was at the forefront of addressing social justice issues and repairing relations between police officers and Black communities in the city. He sat down with Black residents to find out what criminal justice and police reforms were most necessary. He went on ride-alongs with officers to better understand what everyday life was like for a Philly cop. And he was a strong advocate for parole reform, most notably when he called for rapper and fellow activist Meek Mill to be released from jail.

When Jenkins departed Philly, he indicated that he planned to make the city his permanent home once his football career was finished. Now, that day has come, as Jenkins announced Wednesday that he was retiring from the NFL after 13 seasons with the Eagles and Saints. And he reinforced his love for Philly in the following tweet.

The impact this city has had on me is beyond words. Thank you 🖤🦅 https://t.co/ws0FuX0uID

A reunion between Jenkins and Philly makes too much sense. At a time when the city is implementing additional police department reforms, grappling with rising gun violence and a record number of homicides, and seeking to overcome educational challenges caused by the COVID-19 pandemic, Jenkins' voice would be welcome and beneficial to the ongoing dialogue.

What I love most about Jenkins is that he doesn't just talk the talk or constantly post on social media about his activism. He walks the walk and actually puts in the work to create real change for underserved communities. Jenkins literally walked the walk two years ago when he joined in the Black Lives Matter protests in Philly following the murder of George Floyd.

Jenkins helped start the Players Coalition, an independent advocacy group that supports charities and organizations in the areas of criminal justice, education and law enforcement.

Jenkins has never been afraid to speak his mind on issues of race, whether it was critiquing the Philadelphia Police Department's culture or rebuking former teammate Drew Brees for his criticism of the national anthem protests in the NFL.

Additionally, the Malcolm Jenkins Foundation helped Philly students by providing career training programs and college scholarship funds for high school seniors. Jenkins' passion for education led him to serve as the keynote speaker at the School District of Philadelphia's virtual graduation ceremony in 2020.

Jenkins' community activism earned him multiple nominations for the Walter Payton NFL Man of the Year honor during his tenure in Philly.

Jenkins, 34, would join an impressive list of former Eagles who have set up their post-playing careers in Philly with the goal of having an active role in the community. Brian Dawkins and Connor Barwin are among those who have dedicated much of their time to improving the lives of others in the city.

Jenkins had an incredible six-year run with the Eagles, but his impact off the field may be greater than anything he accomplished on the field.

The best has yet to come for Jenkins, and it would only be fitting for him to continue his advocacy work by returning to Philly.