Fantasy football: Rob Gronkowski is destined to be a bust, Austin Hooper, others too 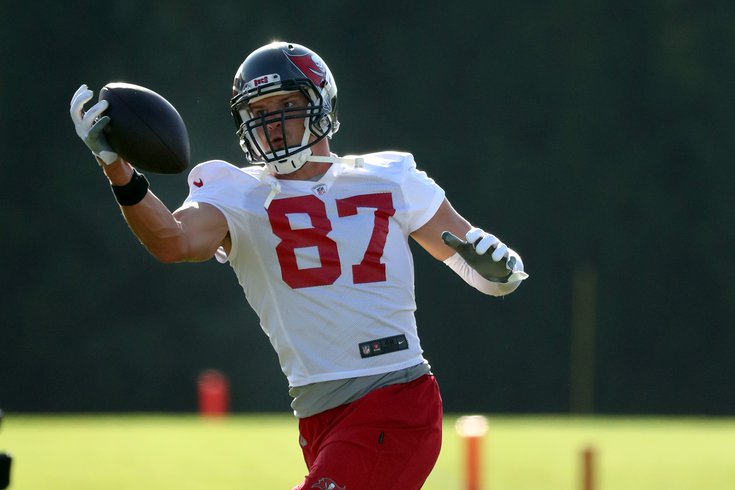 Rob Gronkowski out of retirement and in Tampa Bay... what a strange world.

As fantasy football enthusiasts no doubt know, tight ends can be tricky. Those who don't use a high draft pick on bonafide stars like Travis Kelce or George Kittle eventually descend into the dreaded tight end streaming wars — having to try a different player each and every week while hoping for the best.

In order to avoid that situation, it's best to know which tight ends to stay away from in your initial draft — ones who may set you on the streaming course.

Here are four veteran tight ends to avoid (especially in their projected draft slots) in your 2020 fantasy draft (the rankings are based on PhillyVoice's tight end rankings).

Gronk is back. But is that really a good thing? He's been overrated in fantasy based on history and name recognition alone. The now 31-year-old didn't play any football at all last year, after retiring due to injury issues. The hope by fantasy owners here is that his connection in New England with Tom Brady translates to them reuniting in Tampa. Nothing in the Buccaneers offense is reliable right now, neither is the big tight end's health, and taking Gronk is probably not the smartest move unless you've got him tagged as your backup.

Henry was great in 2019, but that was with Phillip Rivers throwing to him every game. In Los Angeles, a new era is beginning with Tyrod Taylor under center, a veteran who will eventually give way to Justin Herbert. Henry may prove to be a reliable and productive safety valve target in the new look Chargers offense, but the seventh best tight end? That might be a stretch given the current situation. If he drops, he's a good value play, but is certainly not worth targeting too early in your draft.

Hooper was a breakout star in Atlanta, and signed a big contract in Cleveland. Unfortunately, he won't have the chance to show he's worth the money. There are just too many mouths for Baker Mayfield to feed — from Nick Chubb and Kareem Hunt at running back, to Odell Beckham Jr. and Jarvis Landry at wide receiver. Hooper could be a valuable big body in the red zone — and TheLines.com's consensus odds have him fourth among TEs with 5.5 touchdowns, behind Travis Kelce, George Kittle and Zach Ertz — but he will likely not be consistent enough to warrant drafting before other skill position players in your draft.

Graham was great in New Orleans (51 touchdowns in five seasons) and very productive in Seattle (18 touchdowns in two seasons), but he was more or less a bust with high expectations in Green Bay with Aaron Rodgers tossing the rock (five touchdowns in two seasons). Is there a real belief that he'll be better with Mitch Trubisky or Nick Foles than he was with the former MVP Rodgers? Graham is probably not worth rostering until he shows he has something left in his age-34 season.