Winners and losers of the Phillies' offseason so far

Who benefits (or hurts) the most from the offseason moves? 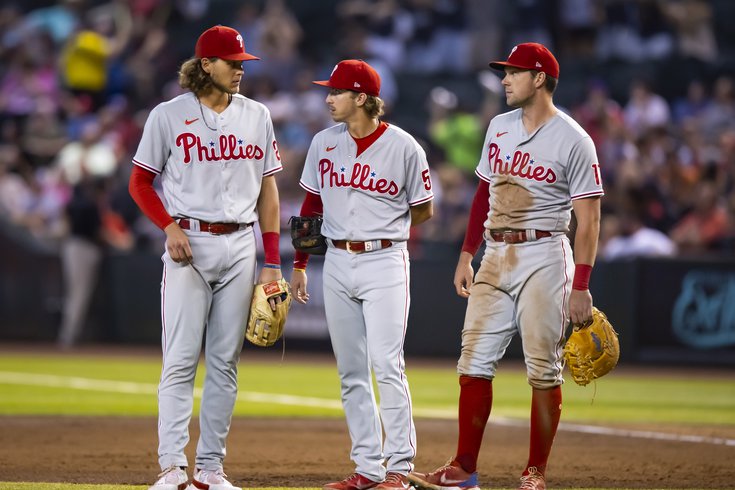 The Phillies infield will look a little different in 2023, but these three will still be on the field.

The Phillies have had an eventful and many would agree successful offseason following their shocking run to the World Series not two months ago.

They've strengthened various weaknesses on their roster while showing the rest of baseball that they aren't scared to spend some of that hard-earned extra postseason income, using hundreds of millions of dollars to bring in Trea Turner, Taijuan Walker and Matt Strahm.

Clearly, all three of those additions to the Phillies are winners, as their bank accounts will attest. But who with the ball club already has also won this offseason? Are there any losers?

Here's a look at the biggest winners and losers so far as the Phillies' important offseason continues:

We wrote about this already, but it's worth mentioning again that the Phillies' biggest need now, aside from rounding out the bullpen and the bench before pitchers and catchers report, is finding a way to retain their biggest soon-to-be free agent.

Nola has emerged as a strikeout king, finishing in the top 10 in Ks in four of the last five seasons. He's also been the picture of good health — he has not missed a start since 2017. He has a 29.9 pitching WAR over his career, impressively 17th best of all active hurlers. His career 10.1 strikeouts per nine ranks 8th among all active players (his K/BB rate is 9th).

Nola had a no-brainer team option exercised this offseason, and he'll earn $16 million in 2023. According to spotrac.com, his actual value on the open market is just over $26 million per season. In fact, they project he'll net a contract in free agency worth five years and $132 million.

For some context, Bryce Harper and Trea Turner already make over $27 million per season on the Phillies' roster. A $26 million AAV would place Nola eighth among active pitchers in the majors right now. But based on recent signings, the Phillies should do everything they can to offer Nola that much. [PhillyVoice]

Zack Wheeler, Ranger Suárez, Walker and the Phillies' top pitching prospects (more on them in a bit) will all be under contract beyond 2023. Nola, who has three top-10 Cy Young finishes over the last five seasons, will hit the open market if he's not re-signed before the end of next year. If he does hit free agency, he'll command a monster contract. The Phillies could have security and some savings if they act fast.

Will his performance be affected by the negotiations or potential departure from Philly? It'll likely be a big storyline all year either way. And Nola will be able to buy himself another house or two.

Thomson was arguably the reason the Phillies made it to the World Series, as he took over for fired manager Joe Girardi and was revelatory in manning the ship. Without him, we wouldn't be writing this and the Phillies wouldn't be looking to repeat as pennant winners.

That being said, the first-time manager took a lot of heat when he pulled his ace for a reliever who would blow any reasonable chance the Phillies had of winning a decisive Game 6 in Houston back in November. It was the kind of move that will live in infamy with the fanbase.

That, paired with his big extension to stay with the club as manager and the fact that the Phillies are giving him a loaded roster leaves him with few excuses. He'll be under the microscope and under as much pressure as anyone in the organization.

Last year as a rookie, Stott actually played 47 games at second base, but was relied on at shortstop 83 times and was far worse there defensively. At short, Stott had seven errors and -4 defensive runs saved (via Baseball Reference) in contrast to second base, where he made no errors and was in the positive column for runs saved.

Having Stott in a better defensive spot on the regular will be great, and having him as a double play partner with Turner (who will handle shortstop duties at Citizens Bank Park for the next decade-plus) could spark even more defensive growth. There will be less pressure on Stott in his sophomore year.

Let's be clear, both of these guys will be key cogs in the Phillies' lineup in 2023, but both are also a loser in some way due to the Phillies' offseason decision-making.

First, they'll both be playing in the outfield (at least as of right now) in the same configuration the team had in the playoffs with Brandon Marsh manning center. Castellanos did make some highlight-reel plays but neither are the picture of corner outfield defense the Phillies would prefer — at least until Bryce Harper returns to play right field next summer.

Neither will really be able to DH much either with the need for them in the outfield. Schwarber also seems likely to lose his leadoff role, a spot he reportedly prefers. Turner is a tailor-made No. 1 hitter and if Thomson knows what he's doing, he'll likely tag Turner atop the order on most days.

The resume speaks for itself. The Phillies' front office chief nabbed the best shortstop on the market at a discount, he added depth and experience to the pitching rotation, he let some fan favorites walk away and is still looking to tinker.

This after he made bold decisions last offseason to emphasize offense and playoff-caliber leaders which helped lead the Phillies to just two wins shy of the promised land. He signed an extension and his job security for the moment is riding high.

The acquisition of Walker puts a Falter rotation slot at risk, but so too does the front office's regard for the pitching prospects he'll be competing against for the fifth and final starting spot.

He wouldn't say who it was going to be, he really can't this early into the offseason, but most fans probably have three names at the ready: One of top pitching prospects Andrew Painter, Mick Abel, or Griff McGarry.

"Those three guys will come to spring training with us," the Phillies president told the media on Wednesday. "I can't say there's anticipation that they're going to make our rotation to start the season, some are further along than others, but they'll be in camp and once you're in camp, anything can happen.

"We are keeping a spot open for a youngster, and when I say youngster, I not only mean those three...Would [Bailey Falter] and [Cristopher Sánchez] fit into that category and anybody else who may join it? Could two? Perhaps two could, but we're really only looking at one." [PhillyVoice]

Falter went 6-4 with a 3.84 ERA as a fill-in starter last season and also was given a forgettable NLCS start (he allowed four runs in less than an inning in Game 4 — which they eventually came back to win). He might deserve a chance to be in the starting five in 2023, but the top prospects on the farm will have a say on that this March.

Hoskins was a divisive figure for Phillies fans this season. He was statistically one of the worst defensive first basemen in the game, and he is an incredibly streaky hitter which can be excruciating at times. But he's also very patient at the plate, yields plus power and is likely better than most of the reasonable alternatives the team could replace him with.

He also did this:

That clip could play on a continuous loop for an hour and it wouldn't get old. But should he return?

We wrote about some of his cons when the season ended:

We mentioned his fielding metrics and those likely are the biggest strike against him staying with the team. But as we said, he also can disappear for weeks at a time, getting mired in slump after slump during a regular season.

He also strikes out — a lot. With patience at the place also come a lot of called third strikes. In 2022, Hoskins struck out 169 times, 10th in baseball. Schwarber, interestingly, led the entire league with 200 Ks. The Phillies seem to have a lot of true outcome-type players (home run, walk and strikeout). Is that a good thing? [PhillyVoice]

Though there was never really much doubt about it beyond a theoretical trade emerging, the Phillies don't appear likely to replace him. The 29-year-old will play out another year of arbitration as an everyday player, and that seems to be a victory for the first baseman.

We are all losers here — as the 2021 NL MVP will be recovering from Tommy John surgery to repair his elbow and is expected to be out until the All-Star break. When he returns, he will play DH for a few weeks or months until, by season's end, he'll finally be able to play right field again.

The Phillies will be shuffling quite a bit to figure out how to handle their designated hitter spot and the corner outfield positions in his absence. Harper will miss more time in the prime of his career due to injury.